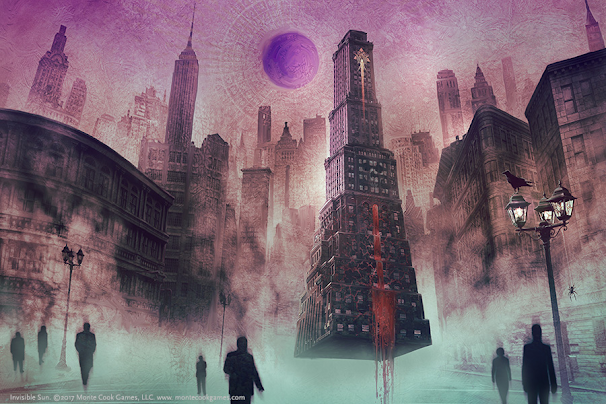 Invisible Sun is a completely unique RPG by Monte Cook Games. The game is designed from the ground up to be not only sandbox-style but to encourage collaborative world-building.

The world is surreal, has ubiquitous magic, all players can use magic in their own way and mysteries hide in every corner.

Session Zero for the game involves collaboratively creating neighborhoods, potential plot hooks, and goals for each person playing in the game. The first part of this process, the creation of each player’s neighborhood, is done by brainstorming ideas for neighbors, points of interest, and problems for the neighborhood; the person whose neighborhood it is picks off the list of ideas, and so creates their own neighborhood.

On June 3, 2022, the Dungeons & Toast Toastmasters club did a Table Topics to recreate this process for a single neighborhood, with each speaker identifying one element. Instead of a single phrase, though, the speakers spent 1-2 minutes elaborating on the element.

The first three volunteers were prompted to think of a person who would fit the neighborhood, and who live near the player's own house. The next two speakers described the points of interest, strange behaviors or other elements that build out the spirit of the neighborhood itself. The next prompt was for someone to describe a problem that is occurring in the neighborhood. In each instance, the speakers had to come up with their own ideas but also listened to what others were saying, and created something that "fit" the collaborative neighborhood.

Normally the neighborhood-building would end there, but I added two additional prompts (to allow two additional speakers) where people described interesting features of the player's house. Normally, these details would be filled in by the player themselves or would come out during play--but it worked to have them crowd-sourced.

As promised, I am posting the results of that session here (as best as I could capture them writing in real-time). Also as promised, these are being entered into my World Anvil world-building site as canon elements that can be encountered in the two Invisible Sun games I run..

It’s not technically left. This is an MC Escher neighborhood, so left isn’t really left. You end up somewhere else. The “first” neighbor looks sort of like a gnome but never stays constant. He always knows where he’s going, and he’s a good source of information and directions. As long as you follow the directions, you end up where you want to go. Maybe he’s a map maker? His directions worked beautifully last time, but you couldn’t get home before the ice cream melted.

Bob. He “gets” the world and especially the Escheresque neighborhood. He’s incredibly forgetful,  never seeming to remember what he discovered the day before. In any case, it’s hard to get any information out from Bob. People have learned that Bob can be tracked. If you see and follow Bob, he’ll always get you back home.

Whether you can walk there or not, if you stand in the player’s yard, you see a beautiful well-maintained 3-car garage. The whole neighborhood knows that Matigan owns the house. Mail arrives addressed to Mr. Matigan. Punctually At 7:55am, he’s driving away to work. At 5:05, he returns home.

He’s not interesting. What’s interesting is that if he leaves at 7:55, then at 8am the animals start moving towards his house. His cats jump the fence. The rats go along small paths through the fence. The birds fly over. The dogs wander around the outside. By 4:30, the yard is covered in neighborhood animals. At 4:55, they start to leave and are gone by 5:05.

A babbling brook. I mean literally babbling. All the property values are worse. Worse than living next to a train yard. Sometimes it gets a little profane, sticking 4 letter words into its babble. It does have the most delicious water, from the magical mountains. It’s not all bad. Or they would have long ago damned it up. (h/t to whoever quipped “Tourette’s tributaries” after the speaker finished.)

As you travel through the seen and unseen. Things come in and leave, but they all feel the tickle. This thing is here, and in our heads, and passing through. It doesn’t map on any senses we know. It maps to others, unknowable, with either a capital H or R in the name. There seems no rhyme or reason. It delights tickling all the wrong places. When you want to have a pet, it’s somewhere else. They might actually know what’s going on in the slithering thoughts between the thoughts.

It used to be so easy to get around the neighborhood. For the last few months, there have been problems. People drive, and their cars disappear into the walls of the canal. When people try to use their narrow boats the canal becomes a road. We need to get control of our transport. Just get what you wish and get the roads and airstrips working again.

I move here. I can concoct my adventures here. There’s another door and another door, and then I’m back in the original door. Or is it? Everything on the left is on the right. I must have gone into a mirror dimension. Everything that’s in the house is normal. Everything is normal including this…wait, I’m not a wizard. There are secret lizard people that know about this!

The House has a whispering willow. Like a weeping willow tree but when you stand underneath it or if you find one of its leaves it will whisper a secret or piece of gossip the tree heard in the neighborhood

Today's Art is from the Monte Cook Games' Invisible Sun website and is an image of the city of Satyrine under the Indigo Sun. While it doesn't show a neighborhood that the players would be in, it certainly gives an impression that an Escheresque neighborhood would be right at home.

The image is used here in accordance with MCG's Fan Use policy and is TM and © 2021 Monte Cook Games, LLC 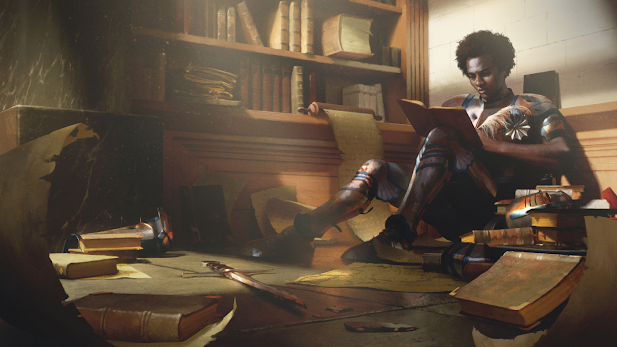 Volk the Scribe, by Steve Stark Mages write spellbooks. Storekeepers maintain records of their purchases and sales. Spies send secret correspondence between themselves and other people. Lovers send letters to each other. Travelers maintain a log of where they've been, and what and who they've seen. In a fantasy RPG setting, virtually everybody that players come across is writing. As my Trinity co-creator and I were discussing dwarves a few months ago we realized that there was an inherent problem and an opportunity. Dwarves are a very lawful and organized people with a strong sense of the community, and we realized that any old dwarven merchants probably have an obscene amount of writing that they've maintained over their career. Assuming they track every purchase, sale, inventory change, piece of correspondence and so on associated with the business, at the end of their 200+ year lives they must have chests full of dusty books, old scrolls and maybe even randomly scribbl
Read more