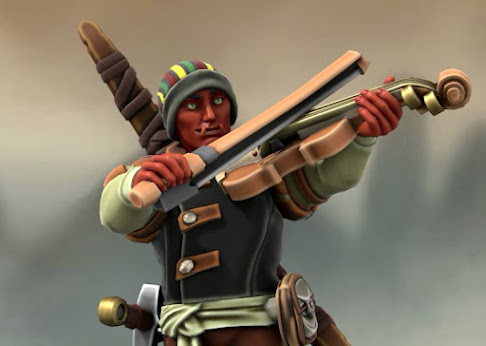 This is Prevel, my 5th level hobgoblin bard. He was rendered using HeroForge's miniature creation software, and he is doubly important to today's word: "Medium."

A Channel of Communication

The bard has always been a strange class--in 1e, the class was an overpowered master of many things, able to bring fireballs and backstabs to any situation as desired. In 3e, it became a master of intuition and suggestion, a helpful buff-bot, and was pretty average at everything else. In 5e, it became a skill master with some really interesting variations of abilities.
But regardless of their true in-game role, the bard has always been a master of performance and a teller of tales. And this aspect is what I've had a revelation about, recently.
Prevel is a gossip-monger, with an impressively unimpressive grasp of the implications of what he learns. (In game terms, this means he has a great, always-at-advantage perform check, but gets minimal bonuses for insight checks to understand the deeper meaning of what he learns.) Among other things, this leads to situations where he learns gossip, and shares it inappropriately to people who don't find it amusing. (Safety tip: The "Willing Woman of Old Man John" does not go over well, when John is a local Lordling who is in attendance.)
In thinking about how that would actually play out, I understood something that was only 600 years behind the times. Bards certainly know the great legends and the epic songs. That's what bard colleges are for. Learn the instruments, and learn the great songs to play on them. But that's only a small piece of it. I realized that when a bard learns news, he often puts it into his songs, worked into existing patterns through a library of well-known tunes.
Thus, he doesn't go to a town and tell people the news. He enters a pub, or a public square and delivers that news through his chosen medium: poems, songs, oratory, while usually accompanied on his favorite instrument. The entertainment gets the audience, and is certainly fun, but he can use information as a currency of exchange: for gold, a drink, a bed for the night or as Prevel does, in exchange for other pieces of information.
The perform check is not just a bard's ability to remember the details of a story or play their instrument without clunking. It's their ability to read the audience, win their approval, and perhaps most important connect new words to an old song, or improvise the song in ways that fit the news or story they are trying to convey.
This reminds me of the fact that slaves in the US used to sing old spiritual songs...like "Follow the Drinking Gourd" Literally they sang a spiritual work song in front of everybody that was directions on how to escape from slavery by going north, including explicit elements of the underground railroad. And nobody noticed.
This leads to another small realization: it doesn't really matter which instrument a bard takes, because the instrument is only one part of the total performance they deliver when they get in front of an audience, and the feeling or message they wish to convey.

A Form of Artistic Expression

On a completely different note, I want to talk about using Hero Forge to render Prevel. The image came from a random web search I did for hobgoblin bard, and found a cartoonish picture that I loved. However, for actual gaming and as a reference for him I wanted something more. I created Prevel in Hero Forge, mapping expression, body, pose, equipment in exactly the way I wanted to produce an image of him. And I was thrilled with it.

But as I played him, I realized that he didn't have the (archery) bow that he carried on his back; he was playing the wrong instrument; and the miniature didn't reflect the different "kits" he had picked up in his downtime.

I reworked the miniature, and found that they had added a violin and (musical) bow. I could put one weapon on his back, and another on his side. I could put a large backpack there as well, to represent all the things he had to drop if he wanted to move during combat since he's quite weak. I tweaked lighting, color palettes, the small items of equipment, and came up with something that looked exactly like what was on my character sheet.

From there, I did a screen capture of a head shot for a character sheet image and for purposes like this article. I exported a full-body image with transparent background for use in Roll20 and also to put in off-the-web backgrounds that looked like fun. I exported a few images where he the background is provided as part of the image, such as taverns, using different poses.

Screen shots of an image is easy to do with a free account. The downloads on a transparent or provided background require a paid account.

The tool would also let me download the STL file, so I could 3d print Prevel, for use on a real battle mat; or I could order it pre-printed in a variety of materials from standard 3d printing materials, high rez materials, colored plastics or even metals. These are at cost, but provide a lot of flexibility. One option is to print the same image multiple times, and not worry about screwing it up when you put paint to it.

And finally, one can download the image in 3d, for use in the tabletop RPG tools that support that format.

In other words, I can be a brilliant and talented multi-media artist, just by using a wizard to create my character and hitting "print" to the medium of my choice (with a credit card, but still.)