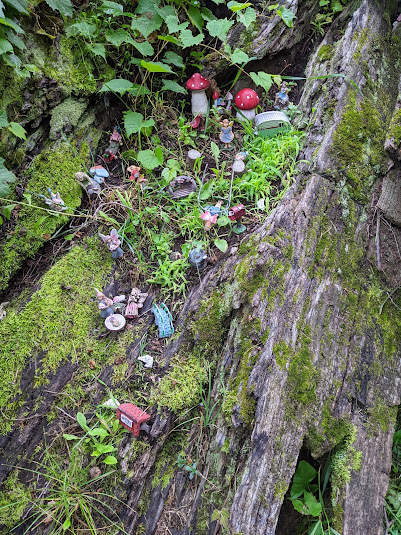 Imagine signing on as ship's surgeon on a 17th century vessel, running into issues and washing ashore barely conscious. Now imagine that you wake up surrounded by 6-inch people who have you fully constrained and under their power. This is the well-known first adventure of Lemuel Gulliver and his experience on the island of Lilliput. An island of small people, both in stature and, as is revealed, their character.

The Lilliputians are also an example of something small which have more influence or effect than one would expect, given their size. That is my theme today...various creatures who, by nature or implementation far exceed their stature in the effect they have in the world of RPGs.

Long the brunt of jokes, bullying and wholesale slaughter by adventurers, kobolds have been in every edition of D&D since the beginning. They are small reptilian creatures between 2-3 feet tall, and in 5e, the only stat they have that isn't single digits is dexterity. If a party meets one, or even several out in the open, everybody knows the kobolds won't even be a challenge.

That is why kobolds are so effective as opponents. They know it too, and so they don't even try to take their foes head-on. Despite low intelligence and wisdom stats, they know how to survive, and how to win. They wield their weapons with finesse, so dexterity, not strength, determines their effectiveness. They hunt in packs, and when they do so, they all fight at advantage. They are master trap makers, and begin to have every advantage if they can get you to their underground tunnels. And if all things are equal, they will always try to fight dirty to win.

And while they breed quickly and effectively, that's not their primary survival technique. Rather, if they aren't going to win, they run. Or maybe they run, and when you follow them, they drop big rocks on you. Either way, they live to fight another day--preferably on their terms.

One of my favorite creatures from D&D is the stirge. Basically they are foot-long mosquitos, and they can be terrifying in quantity. They have almost no hit points, and not a great chance of hitting. Swat them, and they are likely to go down. But their attack does dagger-level damage when they sting you, but then they also stick once they are there, and every round until they've drained some real hit points from you, they take off some more.

Picture Abgar the mighty fighter with 60 hit points. He has nothing to fear from such creatures; who is afraid of a dagger, when you are so mighty? But of the 10 stirges that show up, maybe 3 of them hit. He takes 12 points of damage from those three. He wipes one away, but takes another 8 points of damage from the ones still there, and now 3 more latch on. He's down 30 hit points already, and it's only the second round--with 4 more still flying around and waiting for their turn.

In the same vein, giant insects have been the staple of evil GMs for years. In 5e, they are a bit tamer: a giant spider only does 3d8 damage on a bite, with the ability to web you in place, so you can't resist when it comes to eat you.

Previous versions of giant insects dealt stat damage, draining a character's strength, dexterity, or (most deadly) their constitution scores. Like Abgar in the previous situation, a GM who throws out 10 of these tiny creatures is looking to kill some one. If 3 of them hit on the first round, they've done a small amount of damage, and likely drained 4 points of strength (or other stats) for the very smallest of them. A warrior has long +2 of his hit/damage bonuses. A wizard may be down to only 4 remaining strength, and in another round may not be able to move at all--and insect feasting can begin.

Everybody knows how much fun it is to summon a grizzly bear or wolf to aid your character in their time of need. But I found a really creative way to use the smallest of the creatures. In a campaign a few years ago, we were fighting a minor boss, and were having issues with our ability to hit him.

I used an ally summoning, and brought forth 5 very small animals--rats or dogs. And rather than having them attack, I had them use the "aid" function. This meant that they were being annoying and distracting to the boss--nipping at his fingers and feet. Providing a -2 AC per animal doing this, my most effective sword-wielding allies were suddenly +10 to hit the boss, and it went down hard a couple rounds later.

Creating boss mobs is fun--whether they are monsters or human opponents, they have lots of hit points, do impressive damage, have special abilities, and in general represent a good ending to a quest, storyline or even a whole campaign. The players talk about their conquests for years after.

And as a GM and player, it's easy to focus too much on those big encounters with the big attacks and the "two titans" approach to combat.

Sometimes, the best encounters are little things...humanoid lizards, mosquitos and spiders. These are everyday encounters and real party members don't give them much thought...but if they are played and used correctly, the party may be in a lot worse shape against them than they would be against the boss mob they were prepping for.

Today's art is a fairy garden that I found this week on the body of a huge tree that had fallen in the last year. Somebody anonymously used the wood, natural greenery and their own figures to create this beautiful scene. I chose it because it really speaks to the disproportionate beauty that can be found in small things. As a bonus, I actually took the picture, so don't need to ask for permission to use it on the site.

It's worth adding that Ann Arbor has several "fairy doors" around the city--beautiful little scenes like this, but usually only the doorway to a tiny imagined house--and I think this is what inspired someone to create the scene. Or maybe it was put there by real fairies.