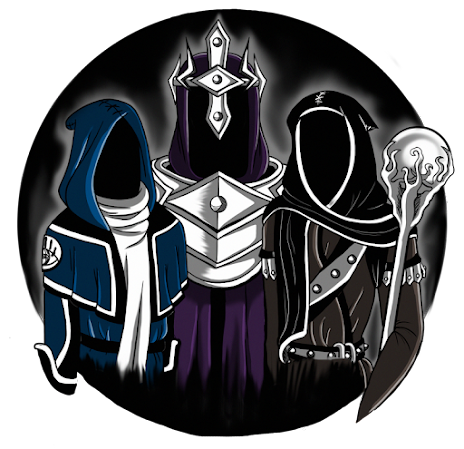 Over a thousand years ago, in the north-central areas of Trinity, there were the Eleven. They were liches born from an alliance of despair, in the certain knowledge that the ultimate power they were owed was lost to them forever.

The First of these, known today only as "One" is said to have been the inventor of modern magic while he still lived as a person. In those early days, he flipped the arcane paradigm from one where magic spells began by defining constraints and characteristics and only then allowed magic to flow into those constraints, to one where the magic flowed freely, limited and defined as it flowed. Less controlled, this new method was much faster, and was equally or more effective in most circumstances than the older model. Over time, as others learned and copied his techniques, it became the favored approach of casters everywhere.

Harnessing the power of this new magic, One was able to see his fate and those of the nine others who formed the Pact. His divinations beat at the foundations of the multiverse, peering into its secrets with techniques of brute force, innovative tricks, and arcane finesse which are lost to time. Through them, he learned that he would never live to see the Ascension, when he and those like him might rise to a divine and immortal position.

Initially lost and despairing, One eventually approached the problem of his fate the way he always had, and looked for new ways to win. He redefined the goals, changed or ignored rules to fit his immediate need and always seemed to have a creative and effective, if sometimes harsh, answer to any problem.

The seed that became his plan was secondary knowledge from his divinations: a revelation that the Ascension was not actually about new gods, but a reaction by the multiverse to guide and direct souls that were getting lost, then being used to fuel dark pacts or serving as gateways to unnatural things that the Rules did not allow.

Rather than joining and supporting that cause, he saw the current system as an opportunity. The Pact researched the nature of death, soul magic, life magic, mind magic, and secrets that the Ascension would erase. They looked for ways to change existing magics, found lost lore and incantations from the old ways, and created tools and materials to help them. Over the next two decades, they created the ritual or rituals that would grant them an ascension of their own.

Eleven, as she is known now, was not of the Pact, even though she refined and improved many of the techniques for which One was given credit. Instead, she was One's friend, lover, foil, competitor, assistant, support, rival and likely soulmate. The irony of this last is not lost to history, given what happened to them all.

How the next part transpired is not known, as any who were witness to the rituals did not survive. It is said that Eleven may have attempted to stop what was happening. It's also said that One begged her to support him and was taken. Though unlikely, some say that she asked to join the ritual, and that what happened was  her own choice. Or perhaps she was in the wrong place when it  happened. But it is generally agreed that some combination of One's love and desire to control her caused him to bring Eleven into the ritual, to gain its benefits and suffer its effects.

Ultimately, the ritual granted them incredible new powers. Burning souls as currency, they gained arcane supremacy, knowledge of hidden truths, aberrant allies and the immortality they sought. And what they lost can only be guessed by their behavior, after.

Almost immediately, the  Eleven (as they are now normally referred) used what they had gained to influence, control and seize the areas around them. Some leaders were cowed into surrender by their threats or their power. Some stood against them, but ultimately fell. And some people had great leaders who successfully staved off their advance. The Eleven waited until those great leaders died, winning by attrition as they swooped in and claimed their  prize.

Their kingdom, Dusk, struggled and was unstable from the outset. Despite the rulers' power, their actual management was ineffective and chaotic and the people of Dusk suffered. The Eleven would neglect major factors of leadership, such as management of resources, then harshly punish traitors who tried to handle those things without permission. Sometimes they would ignore crises, only to appear in a small village to mete out righteous vengeance for the most petty of crimes. They would spend months on a new treaty, then violate it seemingly out of amusement in the first days after its signing. If Dusk was a normal country,  it would have fallen, but the Eleven's iron hand kept it active for centuries.

One fact that those of the time remember about the Eleven is that their faces were never seen. It's not known if their visage was gone, disfigured, showed their corruption too keenly, or perhaps worst of all--it was untouched by whatever price they paid. Mirrors were not allowed anywhere in Dusk, under threat of the cruelest of deaths. Even reflective metals had to be dulled, so that the Elven would never see themselves, or perhaps so that the reflections would never reveal them for what they were.

As for what became of the Eleven, it's said that at least one of them was so lost by the translation that they terminated themselves almost immediately. Some were slain by others in their ranks, which seemed to please One immensely. A few were hunted, successfully; it's known that the Dwarves of the Great Forge crafted Named weapons to deal with at least some of them. But no matter what happened, they were always referred to as the Eleven--and the most precise accountant would never have been able to enumerate them differently.

It was not until One, himself, was slain that the Eleven were defeated. That story, of coordinated heroes, strange alliances, rips in the fabric of the multiverse and the ultimate sacrifice made to end his cruel existence must sadly be left for another time.

Eleven of the Eleven survived, and survives to this day. After the transformation, she was no less cruel than the others, but perhaps she remained more sane, or at least found some peace in what happened to her. She lives on an island, perhaps where she set her own seat of power during the time of Dusk. But that island can't be found and efforts to narrow down its location always fail. Heroes search for her, of course, and their bodies, if found, are usually laid on a shoreline as a reminder to others who might also try. She is no longer a queen. She is no longer an influence to vast areas of Trinity. But on her island, it is said that she still sits on her throne, and absolute ruler in absolute safety, but forever alone.

Today's art comes from artist Skull Splitters, of Deviant Art. Her page, deviantart.com/skull-splinters has a wide variety of creepy and funny "dark" art. I chose it because it represented the liches of my article. It was neither "Witch King of Angmar" terrifying, nor some of the "liches are people too" art that I found. Instead, it shows creatures of power, who present as unified and fearsome, but yet the faces and inner thoughts are masked.