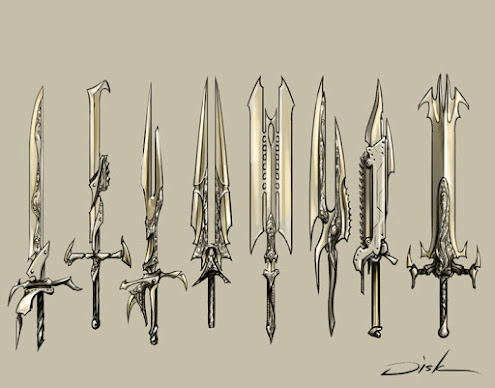 Despite today's header art, I will not be writing about swords. Instead, I'm going to be talking about a very special hammer, and how it evolved through 17 levels over 7 real years of play.

In my first Trinity campaign, one of the characters was a dwarf and also a cleric of the Fire God, Dal, in the Red House. That character, Froin, was just a basic cleric at the time and as far as I know, he chose Dal on a whim. Still, we made a few early assumptions about the character.

The first is that earlier in his life, he had seen or worked at the Great Forge, which is a significant event for dwarves. The Great Forges are literally world-defining, so having an association with one not only grounds the dwarf as being part of something greater in the world, but also gives them a strong sense of personal identity. The specific locations of these Forges (of which there are six) is a closely guarded secret, so one of his early characteristics is that he had zero tolerance for discussions of or jokes about the Forge.

The second item is that he fully embraced his divine choice. This meant that he was very respectful of his deity, always seemed to be connected to him, even when that wasn't part of the story. As Dal was a member of the Red House, which represents maturity, patience, reward for long effort, and so on, he had a gravitas about him, even at those first levels.

Because he embraced the character so fully, I began to make up new in-game ways to reward his dedication. The first and most important of these was to upgrade his weapon.

As a first step, I made his holy weapon a gift from the dwarves. After all, he was a proud son choosing an honorable Path. It went without saying that they would support him with a token that kept him grounded to his purpose and identity, while supporting him on that Path. They gave him a hammer, made to their minimum acceptable standards of dwarven quality (masterwork).

As other characters gained +1 weapons, the dwarves inscribed a power rune on his weapon. This did not make it magical, but instead caused it to be treated as magical for purposes of what it could hit, and what damage resistance it could bypass. While it didn't give him bonuses, it shone when the party came across a "+2 or better" damage resistant creature. His hammer performed beautifully, where the other's weapons did not.

A few levels later, his devotion to Dal granted him fire touch...the ability to do 1d6 fire damage to anything he touched or struck with his hand. This ability flowed through his hammer as well, making it a flaming weapon, while still not being magical. This upgrade certainly made him more effective, but also caused him to double down on his dwarven background, his faith in Dal and his hammer.

As everyone advanced in levels and power, the rest of the party found weapons that replaced what they had, or they traded in collections of old weapons for discounts on new ones. Some went for pure "+hit/damage" weapons while others tacked on new abilities such as improved crit ranges, but they were always chasing the perceived needs of the character. Over time, it was a whirlwind of exchanges.

During these times, Froin would occasionally be summoned to the Forge, where he would have his own weapon upgraded with additional power runes or trimming with special materials. The weapon itself remained non-magical, but over time, it gained bonuses to hit and damage with a rune of Mastery, became more solid (ghost touch) through the addition of Form metals and he continued to channel his clerical magics through it.

And over the same time, the weapon became more an extension of his character, rather than just an item he was carrying. He became very reluctant to let anybody else touch it, and would not relinquish it unless ordered to by very specific people. When a party member tried to use it as a battering ram, beating a wall with it, that especially did not go well. The offending rogue actually got some wisdom regarding "appropriate use of other people's property" beaten into him.

By the time everybody was 17th level, the hammer was probably a bit under-powered, even with upgrades, compared to what everybody else had. But neither the player nor the character would have traded it for anything. It had really become an extension of his own identity.

While we didn't get to this point, I've always thought that when the character finally died, it's possible this weapon could become a relic, which in Trinity is an item that is so infused with the aura of it's owner, than it maintains that connection. This means that if someone who is attuned or connected in some way, they could fire up the hammer, and bring back the glory of the weapon and it's first wielder, in a next generation.

Today's header art comes from Deviant Art artist Andrey, also known as D1sk1ss. I chose this piece because it was it beautifully executed the idea of different and exotic weapons. I have no idea if they would be practical, but they are wonderful to look at, and they all scream "a sword could be even more dangerous if people put extra pointy things *here*"

Definitely check out his other work, on his Deviant Art Site, which includes a "shop" tab.