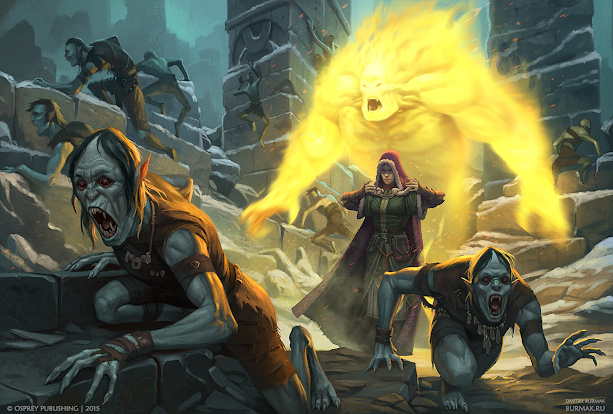 Image by Dmitry Burmak from Frostgrave: Thaw of the Lich Lord by Joseph A.
McCullough © 2015 Osprey Games www.ospreypublishing.com

My Favorite Character - a Tactician

My favorite character of all time was definitely Tal, my D&D 3.5 Beguiler. For those who don't know, a beguiler is a magic using character who really only casts spells from the Illusion and Enchantment schools. By the time we ended the campaign, at 14th level, he was a polyglot with absurd levels of social skills, and magical abilities that were truly terrifying. All those things were fun, certainly.

But the reason I truly loved him was that I learned what it meant to be a "Controller" in a D&D game.

One of the things D&D 4e introduced was the idea of character roles, with each class or subclass mapping to a given role: Leaders, Defenders, Strikers and Controllers. And I had played a controller in EverQuest for a while, and really enjoyed the concept of not doing damage, but rather controlling the action so that the people who *could* do damage were able to do so without getting overwhelmed and dying.

But the beguiler class was a whole other level of flexibility and capability. They had reasonably large spell lists, and because they were limited to just a few schools, I didn't have to pick which spells I wanted to memorize; rather, I just cast anything on my known spell list as needed. In effect, I was a sorcerer with a dozen or more spells to choose from each level.

From the very earliest levels, I realized how effective the character could be. Since I had literally the entire spell list, I was constantly looking at spells, thinking about how they could be used to affect the combat, and then using them to great effect when their time came. For this, I have to offer an h/t to my friend John, who in 1e days, started going through the Players Handbook and seeing if there was a way to kill somebody with literally every spell in the book. Some of his solutions were really contrived, but they worked--and I used that same technique for my Beguiler spell list 25 years later.

The first time this effort paid off, we were fighting giant ants, who are immune to enchantment spells. One of the ants was moving towards an injured party member...so I used the 0-level "ghost sound" to create the sound of a bird, but loudly, so it would sound like a giant bird. The GM shrugged, rolled dice, and the ant ran for the hills. This saved the party member AND removed one ant from the combat until it realized it had been had--by which time we were ready for it.

In the entire campaign, I killed two rats with my sling, and one rogue who rolled very poorly on a tumble check to make it through my Legion of Sentinels--bladed illusionary guards who only did attacks of opportunity. Other than that, I didn't do any actual damage in 14 levels. And as a result, my spells were usually neither offensive, nor reactive. Rather, they were tactically applied to help control the encounter.

My most memorable event was when we were caught by a hoard of diseased creatures. A single touch  could be very bad. Given our positions, and the size of the hoard, I threw out illusionary fires between groups of creatures. This caused one group to hang back, trying to avoid being burned, while the party finished off the others. In the end, we survived a probable TPK encounter, because those tactics let us bring full offensive capabilities to the fight, while maintaining a reasonable defense. As a bonus, only one unlucky party member was infected with the disease. This was really fortunate, since it took us months of real time to get a workaround, since there was no cure.

Another situation was when we were higher level, and were confronting a BBEG in the form of a gnome-created battle bot. He had us absolutely dead to rights with great ranged attack, high armor class,  speed and a piloting gnome with the artifact that we needed, powering the whole thing. Except...did you know that rockets don't work in a solid fog, and that great maneuverability is only effective when you can move more than 5 feet per round?

The key to both of these stories is that I didn't win the battle. I didn't even really participate. Rather, I was the team tactics person. I helped break up mobs of foes, dealt with loose ends, and let the rest of the party do all the damage without getting overwhelmed in process.

And finally, speaking of overwhelmed, I have to call out my favorite of all spells: Mass Whelm. This mental fireball would do 10d6 non-lethal damage to one opponent per level. This wasn't necessarily tactical, but it can really turn the tide of battle when 14 minions suddenly stop their defensive formation and start crying for their mothers, because they realize they've made terrible life choices.

It goes without saying that parties do better in encounters if they have a good approach to a combat, and use tactics to maximize their opportunities while minimizing their risks. As a beguiler, I got to be the one who brought those tactics to the field, while the dragon warriors, wizards and artificers all got to go nuts, and take out bad guys.

Today's art is "Monstrous Form".  Image by Dmitry Burmak from Frostgrave: Thaw of the Lich Lord by Joseph A. McCullough © 2015 Osprey Games www.ospreypublishing.com.

Other works by Dmitry are on his site at burmak.ru, or on his Deviant Art site. Image

I chose this work for a number of reasons. First of all, it's just really well done. But it also has some themes that reminded me of Tal. First of all, the caster is making scaring undead with an illusion, which  is a skill that Tal picked up later in the game. Also, seven ghouls all running for their lives; none staying behind. Either the rest of the party can pick off the ghouls at their leisure, or maybe the lone caster will live another day. Either way, it's great art, and makes a great header for this essay.