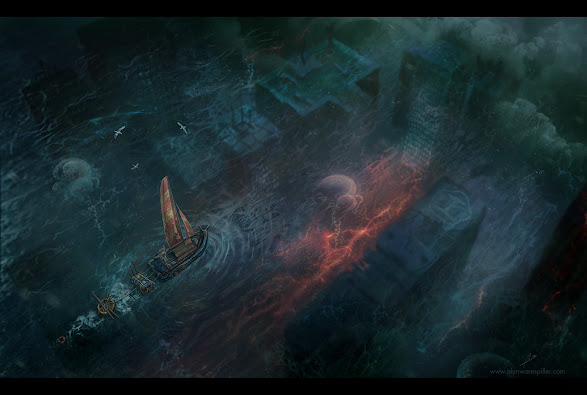 The Old World by Alyn Spiller

For the last three years, I've put header art on all of my essays. I do this because it adds an interesting graphical element to my text-only essays. But very quickly, I realized that the art actually inspires some essays or brings in detail that add more depth to the articles.

This is one of those. I had decided that "flood " was a great launching point for one type of essay, but on seeing this piece by Alyn Spiller, I realized I had to write a completely different essay to do it justice.

Beneath the Waters of Our World

Water is an amazing and often underutilized element for Role Playing Games. In the real world, we have  thousands of marine biologists, oceanographers, educational, corporate and private diving expeditions. Snorkeling and scuba diving are an hugely popular pastime for vacationers. And yet, we honestly know almost nothing about what is in the ocean.

We can make maps of the bottom of the ocean, and have little idea what's actually going on there. We can send probes and even people to the crushing depths of the bottom, but know that just a few feet out of our field of vision might be something unique and spectacular. And sometimes, a fish that has been extinct for millions of years just comes wandering by to say hello.

In fact, the reason that "Nessie" in Loch Ness is such a fun mystery is because that lake is absurdly complex. It's so large, deep and hard to understand that we can't be certain that we didn't just miss the hundred-foot prehistoric creature floating around in it.

The Waters of a Fantasy World

In a recent essay, I talked about a river god, and some of the mysteries of that river.  In a fantasy realm, you have SO many more options to make water interesting.

For creatures, there are aquatic elves, which take normal land-side creatures and give them an aquatic element. There are a number of sentient aquatic sentient species, kuo-toa, merfolk and cecaelias, to name a few, with societies and cultures of their own. There are an untold number of threatening aquatic creatures--jellyfish, squid and octopus variants, and any of the snakes and dragons that make water a very dangerous place. Plus there are the creatures, like elementals, water djinn, and so on which aren't even native to the plane (usually) but can be found there.

For sites, there are shipwrecks which carried who-knows-what to a destination that was never reached. They may be cursed, guarded or just inaccessible. They may make the explorer rich with treasures or magic; they may be as empty as a crime boss' vault opened on national tv. Or they may contain secrets that point to riches, profoundly affect the world in some way, or are better left at the bottom of the sea.

There are sea caves available for exploration, or hidden by silt, rock slides or even magical barriers. Caves are almost never empty.

There can also be lost habitats...cities claimed by the sea. Usually, these would be wreckages of stone or other materials, eaten away by the years. Even relatively recent floods would do away with most material quickly. Any secrets hidden there could be lost forever, unless one knows where to look. But there may also be habitats that have endured, showing little sign of deterioration. Good materials, such as dwarven construction might aid this preservation. Or it could be that the buildings were well defended magically, and they continue to work long after the original casters are gone and the spells have lost their purpose.

And of course, where you have sentients, there are usually habitats. In my world, one of the great elvish cities is below water, and was able to resist the scourge of the shadow folk by simply not being accessible. The thing I try to consider when I create such worlds is that the sea is three dimensional, and so entrances, paths and building decorations may not have a traditional up-down orientation.

Mysteries of the Sea

What I love about the sea, even if I don't use it often, is the idea of the character-facing mysteries available to explore. I mentioned in the first section of this that we don't know much about the sea. Those who live there will of course know much more, and they may be encouraged to share what they know, or they may be inclined to protect secrets that even casual observation might unveil.

Inherently, the sea is inaccessible to those of the world above, so those who live in the sea will either have no connection to the land dwellers, or they will have limited exposure to ships or coastal inhabitants. This means that they likely have no knowledge or interest in how things work above, and their societies may be alien, and their motivations different.

This means that mysteries that are important to the land, may be uninteresting to those of the sea, and vice versa. It means that they may also assign a strange price for any support in learning a mystery, or may be completely unwilling to help with what seems like a straightforward request.

A shipwreck may be considered "littering" and the cost for removing the valuables is to remove the wood and other litter that the ship brought with it. The secret map of the Lost MacGuffin may point to a merchild playground now, and be off limits to adventurers. The merchildren may even be using the MacGuffin as a toy.

It's also possible that the guardian of the treasure of the cave is considered scary by the land dwellers, and really scary by those nearby who have an idea of what it is.

The options are endless, here, because you not only have the normal mysteries, but the inaccessibility of the environment which makes it harder to learn what's going on, the change in environment itself that offers up a whole new set of mysteries, and the paradigms of different cultures who view things completely differently.

I'm only going to touch on this, because it's one of the reasons I don't run these adventures often. Not only are the worlds under the sea three dimensional and weird, they are also quite dangerous. Without magical means, a fantasy character can expect to live about 5 minutes before they die. A good swimming score and high constitution might double that. That said, the difference between "5-20 minutes" and "several days" is clearly one that will not allow natural solutions, especially in a party where one failed save means one less party member.

There are helms, spells, potions and similar that will allow extended time underwater. Hopefully those same items will allow some incremental mobility, since the fastest swimmers in the world are slower than the slowest fish.

If people go into the water frequently, there may be easy access to means of getting around. If there is a small group, then maybe the party needs to get in with that group to learn their secrets, or at least obtain their support. Or the entire expedition may hinge on first finding lost secrets above ground to allow safe and timely exploration below the sea.

Today's header art is The Old World, by Alyn Spiller. Alyn is a professional digital artist out of the UK, and his work is impressive enough that I've pre-asked for permission to use other of his pieces in an unspecified future article, because I'm sure I'll want to. You can see his work at his website alynSpiller.com.

I chose this because even my own thinking had stopped at "floods cover the things you know." This work went beyond; it gave a glimpse at what unknowns may be hidden beneath the depths. What I especially like is that this isn't a "lost city of Atlantis" image where the unfathomable depths of the ocean hides a secret. This is within visual distance of someone in a small craft.

I can imagine someone looking down on a day when conditions are just right, and catching a glimpse of some massive hidden secret that the waters have covered for who knows how long. The red glow and the alien creatures makes it not just mysterious, but ominous. If I were in that boat, I'd be heading for shore with all due speed.