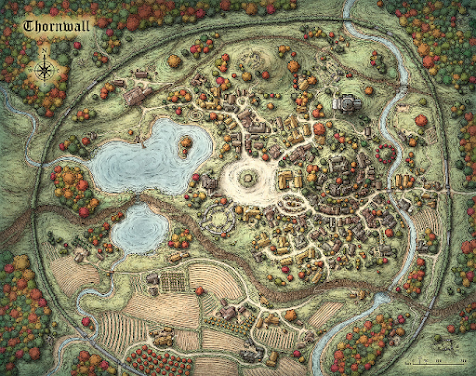 I love maps: real, historical and fantasy maps of all kinds and scales. Maps are a graphical language that describe a space, and not only tells the viewer what's there, but also can't help but impart the perspective of the person who created it.
Many nautical maps were coastline images, with only the most important coastal landmarks displayed: cities, critical resources, ports and such. In fact, such maps were often much more interested in water depths, current directions, reef boundaries and common shipping paths than what was located as little as one mile past the shoreline.
Similarly, there is an excellent 1800's map of Africa that we have, which shows what the Nile River, must do. Explorers know it's here, and they know there are things that would affect it...so it must come from *there*. (It doesn't come from there, but they didn't know that, because finding the source was too difficult at the time.)
In additions, as a world builder and gamemaster, I use real world maps to look at what real land and sea objects look like. The paths, widths and changes of rivers are far wilder than I ever draw them. Elevations pop out of nowhere, or they climb so slowly that nobody notices until they are at a continental divide. To this, (true story) I will admit learning that apparently, rivers do not flow uphill <grabs eraser>.
In addition to physical aspects, maps are a great source of real world social structure. Strange boundaries always tell stories, as do the placement of cities in seemingly odd places. And they are an incredible source of names. My current D&D game is based on a Moroccan naming scheme--and several of the cities, towns, rivers and even the lake that I left unnamed for 20 years all got names by 10 minutes spent looking at a map of Morocco.

Fantasy maps are similarly interesting, and in some ways are even more important because they truly represent everything there is to say about a given place. The map needs to provide the viewer with a perspective of the location it represents. All those little nuances of detail and what the cartographer thinks is important need to be represented in its map. Similarly, there is needs to be a balance between how much time is spent on the map, and where to put those details.
It goes deeper than that. Because a fantasy map is the canon vision of the space, one needs to avoid putting in more detail in than they are ready and willing to commit to. When I create a national map, I think about the water, the borders, the cities, the hills and the ways that people get between places. I don't worry about how many farming villages there are--because honestly, if I need them, I'll add them later. More than that, if I put one here, then there may not be a justification for having one over there where I need it later in a game.
Similarly, I don't itemize every street and building in a town. Besides the effort required which would surely drive me crazy, each unnamed location is an opportunity for me to add content on the fly. If I were to name everything up front, I'd miss jobs and people who really needed to be there, and also not be as able to pop in the "Semi-skilled coppersmith looking for an apprentice" when someone tells me that's what they need to find.
As a game master, I prioritize large overland maps first. I need to understand that level of detail, in order to support any travels that the party will be doing. Again, the details can be a bit sparse, but I need to know where important locations are in relation to everything else, and why:

To go from this city to this one, you have to cross a river. It's a river in the other country, so this becomes a toll bridge. The two countries are not terribly happy with each other, so tolls tend to be higher. Avoiding this bridge can be done by going 15 miles out of the way in each direction, and is really only usable by individual travelers, because caravans will be noticed.

The next thing I focus on is local maps: If I'm doing an urban campaign, or have an urban home base, it's essential that I know what's in that city. What services it provides. Who governs the different quarters, and how the city evolved over time. How convenient is it to get around and how difficult is it to find things? These questions, answered by creating a map, lead to the types of secrets that make a game world so compelling.
The final type of map is one that is *either* incredibly important, or I skip it completely: the encounter map. Different role playing games support different styles of exploration and encounters. The type you are playing will define what you need.
Some games require elevation markers, terrain indicators and maybe even string to identify line of sight. Character position and facing may be incredibly important. How far you can move in which directions, including the handling of corners and diagonals are critical to optimizing certain types of encounters, especially combat. 4e D&D even introduced character abilities like "attack foe and, and move an ally by 5 feet as a free action." Such tactical maneuvers are only possible with a well-detailed map with supporting rules.
Other games support theatre of the mind: "You can run about so far, so sure, you make it." (without worrying about it being strictly +/- 10 feet from the 50 feet you're allowed to move in an action.) If you're in combat, you can hit other things in combat. If you aren't in combat, then you can't be hit, unless there are ranged weapons, or someone closes with you. If someone is blocking you from attacking a specific person, it's because they set their action to do so, not because the tokens are arranged on the board in a specific way. In fact, not only do such games not require maps, they really do better without them. Players or GM's may still need some form of "get an idea of the space" map, but not for the specific events of a combat or encounter.

I have been using ProFantasy's Campaign Cartographer for years, and its new CC3+ edition is an outstanding upgrade to a long history of solid map making tools. The learning curve is awful, but when you get past certain hurdles it's a great tool for making maps. Overland maps are still my favorite for this tool. The dungeon and city versions of the tool are also quite powerful, but I struggle to create maps that I like the look of, so mostly stick to the overland tools.
Wonderdraft and Dungeondraft have both come onto the market in the last few years, and are fantastic at easily creating beautiful maps. And Dungeondraft, especially, is good for creating beautiful and detailed encounter maps, easily. As a bonus there is a reddit forum for Dungeondraft where people publish lots of maps that they are especially proud of, saving me even more time when I find something I like for Thursday's game.
Final callout is to Jade Colossus, by Bruce Cordell. While this book is specific to Numenera, it really has value outside of that narrow scope (like many of Bruce's works.) It is a ruin-generation engine for theatre of the mind gaming. In other words, it creates a on-the-fly dynamic map, with various secrets and opportunities, without ever having to put pencil on paper. This takes the "theatre of the mind" theme, and ramps it up to another level.

Today's header art comes from talented artist and my hands-down favorite fantasy cartographer, Mike Schley. When I saw that today's theme was "Maps", I knew I absolutely had to use one of his maps as a header for my post. This one, a map of Thornwall from Mark Tassin's 5e Aetaltis setting, is not only artistically beautiful, but gives that critical sense of perspective of the space. In addition, as I look at this map, I can't help but begins to draw connections in my head: the busy areas, the hilly areas, the sparse farmlands, two lakes with a road between them, the three bridges and the two spots where the river goes through the city's defensive hedge. I want to wonder what goes on in those spaces, and what stories are hidden within?

For a great overview of his other art, definitely check out his site: https://www.mikeshley.com or his purchase site at https://prints.mikeschley.com/.