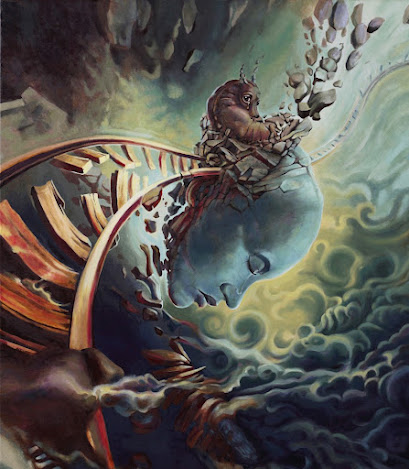 The very first thing that came to mind when I read "Think" as the word for today was Aretha Franklin's 1968 song of the same name. She made Think universally famous through her performance of it in the Blue's Brothers movie. She explained things in no uncertain terms to Matt "Guitar" Murphy, and when the queen of soul has something to say on the subject, it's best to let her do the talking.

Sadly, she wasn't talking about RPGs and so I was forced to come up with my own essay.

What came to me next was "Give me an INT check" which is a common GM tool for remembering a fact, getting a hint, or showing knowledge or an understanding that exceeds what the player knows. Each of these is a completely different circumstance, and that's what I'll be reviewing today.

During the course of an adventure or even a campaign arc, many details will come up. Some characters record important information in a book; campaign summaries that I write are considered the least amount of what people know and remember. So sometimes if the party needs to remember a fact, I'll just tell them what they want to know. Things that happened six months of real time ago during our 3 hours per week of play is not going to stick with anyone. So in that case, I just tell them the answer.

However, sometimes characters need to remembers something important that was not big enough to put in the summaries, or important enough to write down as characters. For those things, there are skill checks if they are available--but after that we have to resort to a straight INT check.

What was the house of that minor noble we interacted with? How many members were in that travelling party we saw go by? Was the 15th turn supposed to be a left or right? What was the magic phrase I was supposed to remember in order to dispel the evil for all time? (Failed check: "Klaatu Barada Necktie")

The important thing for this type of check is to ensure that the knowledge isn't critical to advancing the story. A successful roll might make advancing easier, more direct or less painful, but there should still be a path past it if they miss the roll.

In a recent game, the party was trying to understand a given clue as it related to the minor BBEG, which they hoped to take down as the conclusion of a year of playing. The entire party rolled to understand the clue, and not one person saw the north side of 10, even with stat bonuses. They cheerfully acknowledged that it was NOT in fact a clue, and continued looking for a clue (which came in the form of an ambush.)

These are really common checks, and as a bonus, can be a great way to introduce some minor lore to the game, when they "remember" something that has significance to them now that they are further along.

Whether it's figuring out the next leg of a journey, the solution of a puzzle or getting an unsubtle "are you sure" from the GM, INT checks are a great way of helping move the story along. The nice thing about this is that a successful roll doesn't have to mean that the characters know the answer--it can be a catalyst for a hint.

This is a situation where degree-of-success (or failure) becomes an important consideration. If the character rolls the target number, then they get a decent hint about what's going on. If they roll really well, they certainly understand what's going on and get a better hint. A critical success is worthy of not only a hint, but some context around the answer that may be more valuable than just knowing the next step. And just missing out on success might lead to a lesser hint instead.

One example from a game a while ago was that the party was looking for someone important, associated with their quest. They were stuck, and so I had them roll an INT check for a hint. A moderate success would have been something like "this is important enough that the person who you're looking for may be keeping tabs on your progress." They rolled a critical success, so instead, they got "You've noticed that the last three places you've been, the same person has been in the crowd." They looked around, found, chased and caught the person, and were able to advance the story.

The other "hint" a GM can provide is an "are you sure"? This comes up when a player suggests a course of action that the character would probably know is a bad idea. Player agency is critical, but players don't always remember everything the character does, and you want to remind them that the in-game character might remember something they don't.

I slap the cad across the face, challenging him to a duel.

You remember that the cad in question has a reputation in the city as a master duelist. You heard that in the bar a couple days ago.

Right. I do NOT do that. I (some other action that doesn't get me killed)

This one is important. The people I play with are certainly smart, it's not guaranteed that everybody who plays super-smart characters are in the top 2% of the population for intelligence. Further, the information that a modern era player has is nothing like the knowledge of a fantasy world. All of this is independent of the fact that measuring intelligence is a dubious prospect anyway.

This comes up most commonly as a charisma question: how important is a player's effort at role playing and getting phrasing right, given that they are almost certainly not as charismatic as their character. My approach is to take what they say, upscale it by their charisma or a charisma-based skill roll, and not worry about imperfect implementation at the table.

For intelligence, the same principle applies, but is a little more subtle. Obviously, specific skill checks reveal information that the players wouldn't know. But when a high-INT character suggests a strategy,  tries to solve a puzzle, has an idea, or tries to guess at the outcome of a specific action, it's reasonable to give them an INT check to be more successful than the player would be.

Ultimately, all the real thinking that occurs in a role playing game occurs at the table. The players are creative, engaged in finding solutions, and as long as they have the right tools will usually come up with a solution. (In fact, I often don't have fixed solutions to questions or puzzles; once characters come up with a solution that sounds good enough, I have it resolve.)

But from a stat perspective, the characters are often smarter than the players, and it's important to give the characters the benefit of that higher stat when they go to use their in-game intelligence to approach the world and its issues.

Today's header art is Memory, by Maja Borowicz. Besides being very good, this piece has special significance to me, because I actually found it (and many other pieces that I loved) a few months ago.  I loved it enough that I knew that I'd want to use it, or some of her other work in an essay, so I asked for permission back then for permission.

I chose this piece specifically for this work, because it's a great image of memory. I see a person in their mind palace; a path exists through it hopefully giving them what they want, but the path is difficult, has distractions, things break down over time, and clouds everywhere hide the light of clarity. And yet they don't despair, they remain serene, just do the work, and come up with their answer as best they can.