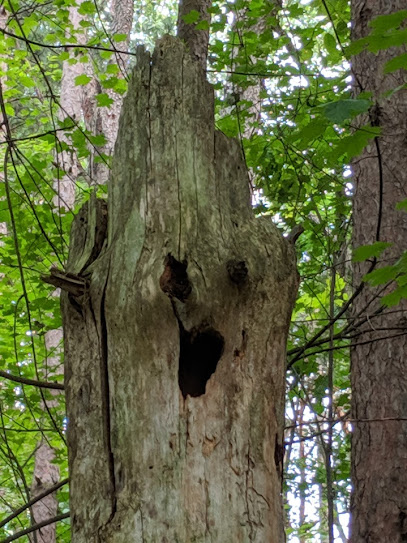 I'm not a fan of random encounters. As I mentioned in my previous essay, I love random elements coming into a game, and making it go in an unexpected direction. But I've never liked the feel of rolling on a table then creating something the parties need to deal with just to give them something to do or to push them along. I have to say that these wilderness pacing issues aren't unique to RPGs, though; authors have the same issue. One of my friends describes a certain fantasy novel as being "15 pages of 'they were on a hill, and it was raining'."

So when parties travel, especially over several days, it's easy to get into a tedium of repetition, and it's important to put something into the story so that "it's the journey AND the destination." I'd like characters to look forward to travel.

Here are some of the techniques that I use to make travel through the wilderness more interesting.

I identify hooks...usually 1-2 per trip, and I usually let the characters choose what they choose to pursue and how the encounter plays out. While sometimes they are straightforward, like brigands, I usually make it a more sandbox themed encounter, so the players will have agency.

The party was travelling by coach to a nearby town, and they heard an angry roar just off the road. They stopped the carriages and went to investigate. They found a pack of wolves attacking a small gray dragon. The dragon was doing well, but was outnumbered. I had no planned outcome for this. The detail that was interesting about this encounter is that there is no such thing as gray dragons. There are rock dragons, but they don't look like that. The party chose to fight off the wolves and the dragon flew off. The reward for the encounter was that one person managed to find a dragon scale that he hope to turn into something interesting later.

An unintentional version of this was the ruins of a city that I described as background text; the party showed an interest, and went to explore. They spent the next two days of play time exploring that city, finding its secrets and fighting the illithid they found exploring it as well. This city began as nothing more than an arch to nowhere, and I created it, it's background and its secrets between the end of one session and the beginning of the next. This actually slowed down their travel, but really engaged their interest in the trip.

For this, I create something interesting at one of the logical stopping points along the way. Something that can be solved relatively quickly, but adds interest and memory to the journey. New people to meet, plot hooks for the taking now or in the future. A merchant who is selling odd wares, or just a point of interest for them to explore. The key is that a brief diversion from the trip adds interest without dragging things out.

The way this plays out is that the characters stop at a camp or a village catering to travelers. They see a person, see something going on at a tavern, hear a sound in the night or whatever. It's no different than the random encounter above, except that the story has ended the day's travelling, and a story is tied to that fixed point.

One of the reasons I like this is that it not only doesn't interrupt the "travel" flow, but also makes a connection to the place.

One of the most interesting of these was when the party spent the night at an inn between two cities. When they left the next morning, there was an additional road, heading east, almost as soon as they got going--one that wasn't supposed to be there and in fact hadn't been there the night before.. They explored the road, and found an elvish village that had been destroyed thousands of years ago, but the the elves and buildings were all there, in ghostly form. The village became a story hook for the party, to address later, but anchored that overnight stop as somewhere to remember.

Sometimes it doesn't need to be about about the journey. Sometimes it just about getting where you want to go. If a journey is on a standard route, and the party and players just want to get there, I'll just wave my hands and have it be several days later with them arriving at their destination.

Video games have fast travel, and at some point, even narrative RPG stories don't need to get into every possible variation of the trip. I especially bring this out when there isn't anything new for the party to see along the way, but sometimes do it when the going through the travel might be burying the point of the story by pushing it ever farther away.

City Folk in the Wilderness

I have one story that isn't about travel, but rather, about an urban party ending up in the wilderness. They were supposed to travel about 5-10 miles off the road, to meet people at a specific spot. They arrived early to ensure there were no issues or confusion. In fact, they were early enough that they had hours to burn...so they decided to go hunting.

Normally, this is nothing more than a narrative event. Survival skills, tracking skills, expertise with finding, trapping, handling and/or taking down animals are so mundane that GM's just apply a slowdown to the travel and call it done.

However, this party didn't have a single skill that was relevant to their idea. They'd find the odd rabbit, and chase them, but be unable to actually catch them. They did finally resort to shooting at rabbits with bows, but the sneaky little things were amazingly wary and not willing to stand still to be shot at.

Eventually, they did manage to bring down a rabbit or squirrel--then realize that they had NO idea how to dress the animal for food, including skinning, making it safe to eat, and optimizing the meat they got off of it.

It made for an experience that was both hilarious and humbling to the party. I'm proud to say that none of them took those skills later. They just accepted them as an inherent weakness to being "city boys" and moved on to other things.

Today's art is a photograph I took of a ghost tree, while hiking at a lake. It was clearly haunted...its overall shape, with the tendrils coming out of it, its eyes focused on something that isn't there, and the mouth in a perpetual scream.

The same hike has the Cthulhu tree, which is more menacing. But this tree is a small optional encounter placed there by the universe. The party can try to help, interact, or just observe and move on. If I were creating this hike, in my game world, I definitely would have put this tree there.