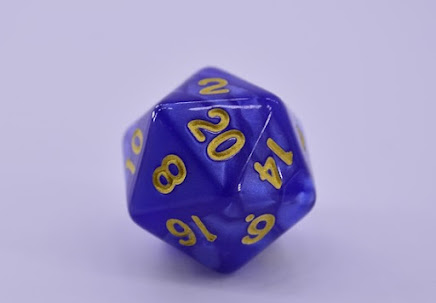 Tabletop Role Playing Games are collaborative storytelling. A few of those games are pure storytelling, but most of them have elements of chance that affect the outcomes from a static narrative. Whether these are dice, cards or typing a command into a computer those random elements are seen as a critical part of the story: Random generators provide the chance to succeed when no reasonable analysis would result in a positive outcome; in the other direction there's always a banana peel.

Today, with the word "Trust" as the prompt, I'm going to explore the idea of fudging, and so for the art today, I found this picture on Pixbay. Sadly, it did not come with attribution. But the reason I chose it was because the 20 is sitting there mocking the roller. It's pretending that the result might be spectacular, but the "2" is clearly face up and not going anywhere. And yet...because of the way the die is positioned, it would only take one tiny nudge to make it a 20.

To be clear, this is not going morality essay. Rather, it's what I've observed over the years as a GM, and where I've come down on these issues.

This is one of the most controversial questions in gaming, and whatever side people come down on, there are really good reasons for it. That said, here's where I have gotten to over the last 43 or so years of gaming, and what works for me.

I have a GM screen, and behind that I have the freedom to roll all the dice I want, and interpret them however I like. Sometimes, the results of those rolls are harsh, and I don't feel that they align well to the story we are trying to tell. I have absolutely fudged dice: more often than not, when it was in the players favor, and very rarely when it was in the world's. Some people say "story over rules", which is a whole different discussion. This is "story over dice: and over the years, that's worked well for me as a tool to use as I needed to.

However, recently I've really become enamored of having things happen that I didn't expect. I've loved the Sooth deck in Invisible Sun, were a single card can affect the outcome or direction of a whole scene. I've enjoyed GM Intrusions to a story that send things off on a tangent. Most recently, I've been running Sandbox games, where what happens is focused on the players, and the GM creates and interprets the world around their actions.

As I've made this transformation, I've also been more of a proponent of "let the dice fall where they may."

To this, I think back to playing some of the Dragonlance modules in High School. We took on the roles of named characters, playing through the fixed narrative of well-known books. I specifically remember being Sturm Brightblade, and making an all or nothing die roll against an attacking dragon. I was at around 4 hit points, and the dragon was untouched. I swung, and rolled near max damage with my 2H sword. The dragon went down, and was quickly finished off by the others. This was cheered by the table, and the moment lives with me today. But what if I had missed? What if the dragon had hit me again and killed me? Sturm would be dead 3-4 books early, and the outcome of that module might have been very different. At that point, does the GM fudge rolls to keep Sturm alive? There are several things an experienced GM could do to handle that, but fudging the dice is a really easy one and perhaps a less obvious manipulation than others.

But now, I'm running a story that doesn't have a fixed narrative; nothing that happens affects a planned outcome. In one specific encounter that just happened, one of the characters had been poking a bee's nest and the "bees" were sending assassins. Finally, in the last sessions of the year-long-arc it came to a head. The party went into the nest, to deal with (at least) the lieutenant. I open-rolled every roll that game.

This became interesting as the party went through, because the "trash" mobs in the first rooms were open rolling 16's and higher every roll, with high damage and so were putting up an incredibly good fight. If I were writing the script, it would have been warm-up challenges, mid-dungeon mini-bosses and a final combat. Instead, it was Spartan defense early on, followed by mid den bad guys who ran for their lives and then a final combat which frankly had really weird results that included the boss wandering past everybody as a non-combatant.

So...do I fudge dice rolls now? Rarely. For me, roll fudging is a safety valve for setting up a combat in a story where I grossly misjudged the encounter scaling. If characters set themselves up for possible death, and die...that's okay. But when something is supposed to be an exciting story element, but potentially kills off a character unreasonably, then I'll possibly fudge. This is especially true where criticals are involved, because those are more arbitrarily deadly than normal rolls.

So how about players fudging rolls? There are a couple reasons to do this, and we'll exclude the person who feels a need to always succeed. Usually, fudging occurs because either the situation is critical, or the player feels their character isn't contributing to the story.

I don't condone or condemn this action. Rather, I try to mitigate the results of bad rolling by narratively addressing the situation.

My final opinion? I'm now on the "don't fudge" side of the discussion, but not because I haven't played both ways, or that I don't see the merits. Amber Diceless RPG was a great game, but the results were always predictable, based on a function of player actions/creativity and GM being consistent in their interpretations. Fudging die rolls does nothing more than mean that unexpected successes or failures don't bring unknown elements to the game, and so brings the game closer to being diceless.