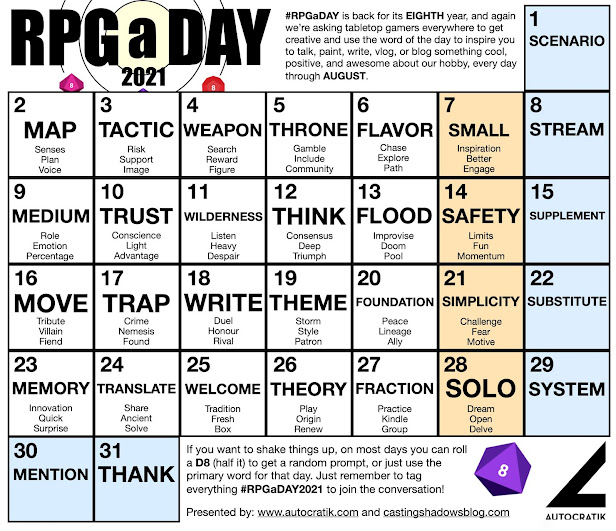 As the gamemaster, it's my job to come up with "scenarios" for the party: encounters, events, or even brief storylines that last one or a few game sessions. For most of my time running games, I have tended to go into detail in my notes about the planned adventure of the day. I fully support player's having choices of what to do, but I liked to have things planned out, so that I had the information necessary to keep things moving. And truly, while full player agency means that the characters could ignore what I set out, the "collaborative storytelling" model of gaming says that they normally got around to following the planned hooks, eventually.

But over the last few years, as my time for prep has shrunk, and my interest in more sandbox-oriented gaming has grown, I've changed that model significantly. Now when I know that characters are likely to end up somewhere, I create several opportunities at that site, for the evening's scenario--without a lot of detail about what's going to happen.

I'll create a map and I'll put hooks that could lead to some type of action or detail in the story, but what actually happens depends not only on the player's choice to investigate or engage, but how they choose to approach it.

One example of this was an inn at the end of a day's journey, at a point between two large cities. In fact, because of the volumes and types of traffic, there were several inns to choose from. In preparation, I had a couple of inn maps defined, and very rough notes about the NPCs to be found at each one. Those NPCs had different perspectives and motivations, but no specific storylines tied to them.

I also put three groups of "interesting" NPC's, who could be brought in to either inn, if it made sense to do so. One was a non-social group of warriors that were part of some order. One was a table of women who were very mysterious with a dark aura about them. The third was a table of rowdy travelers making a nuisance of themselves.

All this information, besides the maps, fit onto a single hastily-scribed page of notes. The players could have ignored it all, and moved on. I would have been fine. (Unused maps can be brought back later.) But they likely would, and did, start observing one of the groups--they chose the rowdy one. Their attention caused things to happen within that group, then interaction (and eventually combat) ensued.

And so, we had a scenario, and everybody had a good time. The party had a session-long event that was memorable. They made some enemies who may never come up again. They made some strange allies out of one of the other groups. The inn's owner appreciated how it was handled, and welcomed them back anytime. But the key is that literally nothing that happened was a staged encounter. I had lightly structured opportunities, but it was neither directed, nor forced choice.

But it was a scenario, and from the players' perspective, it might as well have been fully planned out. They got interested, things happened and the action flowed to a natural conclusion of both the event and the game session. And as stories get told around the campfire, this becomes one of those "do you remember when" events that sticks out in their minds.

And those players don't need to know that I spent more time looking for maps and finding tokens to put on them than I did writing the three scenarios, of which they picked one.

If an adventure is going to take place in a dungeon, fortress, ruin or similar, I generally have that documented pretty completely ahead of time, as the deliberate placement of traps, items, events, foes, secrets and such is much more important to the success of those scenarios than what can happen on a normal day of gaming.

I want to give a callout to Monte Cook Games for the "Instant Adventure" format. This reduces a "4 hour" game session to just a few pages, with some background, some locations, and a map where things can occur. The GM has to improvise a lot of what occurs, but enough structure is provided to not put all the work on the GM. But it's also open enough that I've never seen the same adventure run the same way twice.

I have to say that that this format is so natural and  useful that having seen and used it, I'm amazed that more people don't publish modules in that format.

And a second callout to those who *have* started using more of that format--understanding that players are going to choose to do odd things, and that many GMs like to improvise, they provide a solid structure, but leave the rest to the table.

A Reminder about RPGaDay, and today's "art" header.

This is the eighth year in a row that Autocratic and Runeslinger are publishing a list of writing prompts for the month of August. Their goal, as always, is to encourage discussions of RPGs in a positive fashion. Each day has a different prompt (this year, just a single word) and people write essays, create podcasts or just create short social media posts.

I write blog entries, and in fact that's why I created this website in the first place. I have participated for most, if not all, of the RPGaDay prompts. My first several years, the essays were posted to GooglePlus and I linked to those articles from other social media sites. When that service went kaput, I created a blog site, which would give me the same capability, but be under my control. (I do have an archive of those older essays, but haven't gotten around to migrating them to this site.)

I do maintain a few personal rules when I do this:

I hope you enjoy these essays. I work to make them approachable, interesting, and fun. I love feedback, even of the form of people adding their own "micro-essays" as responses. And if you let me know that you're participating, I'll look for your essays, as well!

The prompts themselves are the art header for the day. That means that tomorrow, you can expect me to be writing about "map" unless I get stuck, in which case I'll pick one of the other words. 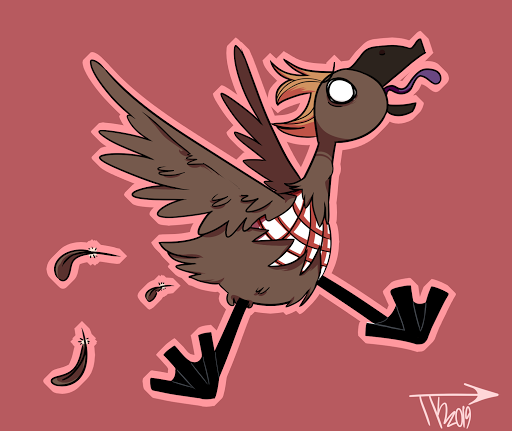 In a recent Twitter RPG discussion, a friend revealed that a weregoose was the main villain in a small rural town. I quipped that at least it wasn't a wereswan, and got an immediate response that a weregoose would have a wereswan for breakfast. After thinking about it, and discussing it with my daughter I realized that the commenter was right. In this article, I consider the characteristics of a weregoose, and why they would be truly terrifying foes. Natural Basis To fully understand a weregoose, and understand how its characteristics are enhanced in lycanthropic form, one must first consider the basic animal form. First of all, they are large birds. They are up to 3.5 feet long with a wingspan that can stretch over six feet. They weigh up to 14 pounds, and are sufficiently strong to break bones.  They are also very territorial, especially around mating season, so somebody wandering too close to a nest or a gosling may find themselves on the wrathful end of a goose attack. But thei
Read more