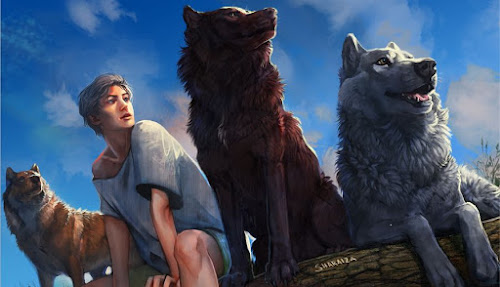 Today I'm going to talk about relationships in RPGs. My this, I mean how characters relate to each other, to the NPCs who make up their personal connections and even how those NPCs relate to each other beyond the existence of the PCs. Getting this right, and making it honest is a key element of truly successful storytelling, and is at the same time one of the hardest things to deliver realistically.
PC Connections
Connections between characters are technically the easiest. The party comes together for some reason, and over the course of their adventures forms bonds, habits, quirks and irritations. This becomes easier as the character sheets become more real, and then the connections begin to form. Sometimes this manifests as "these two people tend to do tasks together" or "this person always hates the plans of the others." These are great, but what you're really looking for is the ability to know how each character feels about each of the others.

In my first game, personalities really came out, and we got some great interactions going:
There were more characters and more interactions, and I was ultimately happy with it. But it took a while for it to gel.
For my current campaign, I tried something very different to see if it would speed things up. I used a technique from MCG's Your Best Game Ever to pre-generate connections between the characters. Each player chose a one or two directional connection between their character and another. They were free to pick anything they wanted, with the only rule that the whole party needed connectivity.
The effectiveness of this came out in the very first day. Cam, the halfling barbarian, wanted money. He got a job guarding a warehouse. His half-brother Hasan came with him, which brought in best friend Ahmed, and someone else with a mystical bond. Because they were going, others joined, and suddenly all seven characters were on the job. And the players got it. So they began to play up these relationships as the campaign evolved--and at second level, there are some real connections going on.
Side note: This "connections" technique also worked when someone was able to join for about three real-world months; They picked a connection, were introduced and walked onto the playing field with the other seven and no story awkwardness..
NPC Connections
Next priority, but very important is that PCs have connections to NPCs. PCs have to have people they care about, rivals, acquaintances and family. Traditionally, family members in RPGs are either people who get killed as part of the backstory, get kidnapped as a plot element, or who never make any real appearance other than a "see, I'm RPing a family."
For this, I used another technique, which is contacts. Each player had a background based on where they were from, and each background provided them with a number of contacts. Those contacts, along with the system of favors described yesterday, creates people who the party goes to. Because I know they will be recurring, I put extra effort into ensuring they are interesting with personalities. I often let the players take the lead in defining these personalities and so they in turn invest in those NPCs.
One example: Raffin is an apprentice to a woodworker. How does he get away from that to do adventuring things? The player played up Raffin's guilt from not being there. He put in the time to make up his hours. In return, his craft-master has a soft spot for him, and shows her appreciation by slowly letting him into her secrets. The player enjoys going to work in the evenings, because the interaction with that NPC is fun.
Another great NPC interaction is "Mom" Two characters decided they were half-brothers through their mother. Hasan was a half-orc and Cam was a halfling. How did that work? No idea. Mom is a priest of Cime, the goddess of Spring and fertility--maybe that has something to do with it. Mom hasn't brought it up, and nobody is actually willing to ask.

In one adventure, it was Sunday, and Hasan declared that Sunday was Family Dinner night...that all the children in the area had to attend, and guests were welcome. So...that was a thing. Sunday dinners became a ritual of the characters, because nobody wants to disappoint Mom. When the "new" family member came in, he decided the easiest path was to be Hasan and Cam's brother, and showed up at Sunday dinner, was introduced and the rest was history. Except Khayrat is a full gnome. How does that work? No idea. See above.
The following Sunday, another sibling, an NPC, showed up. Egonia is human, like mom, except for the obvious elf blood. One weird thing. Both Egonia and Khayrat are in their 40's. Mom looks like she is in her 40's. How does that even work? No idea. See above.
But from all this, the story has developed some major PC-NPC interactions, and the Players are invested in creating those interactions, moreso than in previous campaigns. Nobody misses Sunday dinner. Everybody is eager to meet the new family member. Everybody except Wen is eager to tell stories to the young'ins at dinner. And the contacts are becoming more real to everybody.
What this has created is not just better stories with interesting connections to the NPCs, but a whole new resource in the form of a growing set of NPCs the players actually care about. And as a GM, I don't want to put targets on the backs of those NPCs, either. Rather, I want them to be hooks for stories that the players relate to; I want them to be assets when the characters are involved in stories of their own, and I want those NPCs to be people that the get told the stories at the end of the day, especially on Sunday.
NPC Connections to Other NPCs
In this final element of this essay, which I'll only describe briefly, is the need for NPCs to have interactions with others. It's too easy to either have NPCs be scraps of creativity (or plot progression) who vanish as soon as the PCs leave the area, or worse, just compasses to the next just-in-time NPC. It's equally too easy to have NPCs be critical plot elements: secret cult followers who are reporting the character's every action to the higher ups.
The current campaign is 2nd level. Players are not involved in worldwide cult activities. If they were, they would all be dead. (That said, Cam is trying to get involved in semi-pro sportsball, so maybe cult membership is coming.) But it's reasonable that if one person is in the export guild, and someone else is in the transport guild, than they might know each other and have connections outside of their jobs. It's also possible that someone from the export guild might know people from the courier guild, because they grew up together.
These things can end up just being compass pointers and sometimes for efficiency that's exactly what's going to happen. But if as the GM you can set up some of these connections ahead of time, or even work them just one level down from the superficial when they are introduced, stories, plots and connections can begin to emerge.

The nearest I've ever come to a romantic relationship in one of my games was when Lohrin the Bard was forced to marry a daughter of the King of a foreign country. The King considered Lohrin and up-and-comer and wanted that connection in the Thorinese court. There was no romance; it was an arranged marriage, though that relationship did generate some story time and amusement.

In my current game, though, one of the players has a crush on a bakery worker. This is wonderful. Things will work, or not, but the beginnings of his interest are playing out as a story the player chose, and so becomes both important and more realistic. And to me, this is the critical element. It's easy to just declare relationships for the sake of the story, but without real investment, it's hard to actually make the characters of a story close.

Today's art is called "The Fam" and it comes from Sharaiza, an Italian artist. She specializes in animals, people and the interactions between them (among other things.) Her art tends to be bright, generally positive, and the characters are all represented with emotion. If there are multiples in the picture, they always show a real connection. The reason I chose this piece is that it represents the closeness that I feel is so important in bringing stories to life. This piece, with three canines and a boy illustrate that they are a definite pack, even if they are a different species.