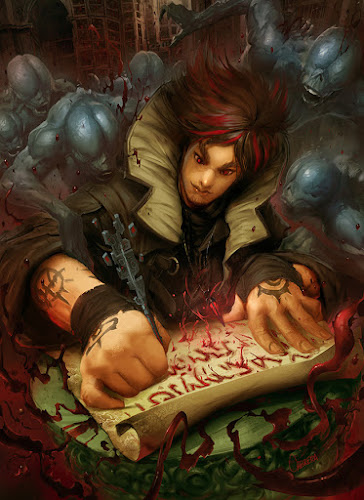 For literally 20 years, I've been running my games in the highly lawful meritocracy of Thorin. The campaign itself was "The Guardians" which were a group of military problem solvers who reported directly to each of the seven Dukes of Thorin, with some who reported directly to the King. The characters joined this organization because they felt a sense of duty, and because it offered opportunities for growth through success.

My new campaign, the third set in this part of the world, is a totally different country within the same region. The country is called Buchar, and the players all reside in its capital city of Jadir. I mentioned in an earlier post that Jadir is a city where things work a little differently. Bribes are standard; smuggling is only questioned when people don't get their cut, and who you know is a major factor for any transactions. Key to all of this is a system of favors.

The first adventure of the campaign was a 1st level warehouse guarding event: just make sure nothing gets taken. Of course, one item did get taken, and that led to the next several sessions, where it wasn't about getting the item back. It was about closing the loops so that all parties were satisfied with the results. It was strange for me to run, and it was strange for the players to work through, but they enjoyed it, and it led to a whole new level of opportunity in the campaign.

Two key things came out of the campaign: First was the idea of contacts that each player had. The players defined their contacts, and that became canon. I created a system of the importance of each contact and how much they were willing to do for the character, with a casual but important person being about equal to a minor contact who would go to Hell for you.

The other mechanism I created was a system of favors. When you ask somebody for something, they might very well help you, but in doing so, ask for a future favor in return. As we played through that first adventure, this mechanism really gelled. Favors aren't huge game-altering commitments, or at least, they don't have to be. They could be "Give up the name" and in exchange "I'll owe you a comparable favor in the future" which might be "give up the name of who seems to be hiring."

A real-world example of this...some key NPC's requested help with some treasure gathering in exchange for a favor. The PC's claimed it as "Let us use your house for a few hours to make contact with someone on neutral ground." Nothing earth shattering in the deal, but some risk was taken by both parties. The key is that they kept track, and the books are now even.

After years of people helping because of their good nature, it's interesting and fun to see people trading information, position and/or resources as a currency. Most characters at this point owe a small favor to someone and a couple favors are owed to the PC's. As I maintain my matrix of the NPC's and how they relate to the story and the PC's, it's fun to include this new piece of information...minor favor owed. There's no malice to the system. It's literally a different way to look at helping each other.

One thing that's really unique about this, is that it give me a chance to roleplay as the GM. In real life, I don't think in terms of favors, except for "favors that don't need to be paid back" (spending a few hours working with someone to help them understand something) or "favors that we don't keep track of." (helping friends move...no count, but I've helped you move, so you better be here when I do.) The idea of keeping actual track of favors, and equating one favor for another is not the way I think, and yet as a GM, I can channel the world in which this is a mechanic that makes total sense--because everybody thinks this way.

Things just got a bit different in the last session, as somebody asked for something and signed up for their first big favor. This is something that as GM I can use to actually direct the campaign a bit. Somebody has a big commitment, and that leads to the next adventure hook. But as I look at it, it really re-emphasizes the fact that favors aren't "deal with the devil" contracts. They are a means of maintaining types of equity. So even a big favor isn't supposed to make the person executing it resentful. That undermines the whole system...because it risks people not delivering their end.

That said, in John Wick 2 or 3, one of the characters calls in a marker. This is a no-holds-barred commitment to deliver a favor. Without spoilers, John deeply resents what he's being asked to do. But he is honor, tradition and "rule" bound to deliver--and so he does. Such things exist in Trinity as well, but I see them as a much higher level concept than the players are currently at, and honestly, as a gamemaster and world builder, I think that supporting someone else's marker is a much better storyline than having the players owe one.

When somebody asks you to do something for them, why do you help them? Because you like to help? Out of a sense of duty? Because of social of familial obligation? Or is it because it's part of a system of ongoing favor bartering that helps keeps everything somewhat balanced? Most people reading this will answer one of the first three options. But the fact is, there are places in the world, and even in this country, where there are systems of favors...and it's not a bad thing, as long as everybody is playing by the same rules. In an RPG, it makes a fun mechanism that creates extended connections between characters and the NPCs they interact with: Every time they ask for whose name was on the manifest, they can expect a similar question to come their way in the future from that same clerk, coming to claim their favor.

Today's essay is the word "favour" but it was when I looked for "contract" that I found this wonderful piece by Argentinian artist Carlos Cabrera. The link in the sentence before this is to his website. However, since posting, he asked me to link to The Free Bundle which is a free webzine that he, his brother and others have created. I was more than happy to do so, both because he asked, and because his webzine looks incredible.

In terms of his art, I love the level of detail, as well as the coloring and use of light in his pictures. For this particular picture, I love how the unfortunate signatory is feverishly writing away his existence in blood, as demons watch eagerly for him to trade whatever trivial thing he wants for his immortal soul. It strikes me that he's not doing this of "sound mind and sound body." He is pushing through to completion, before he loses his nerve.