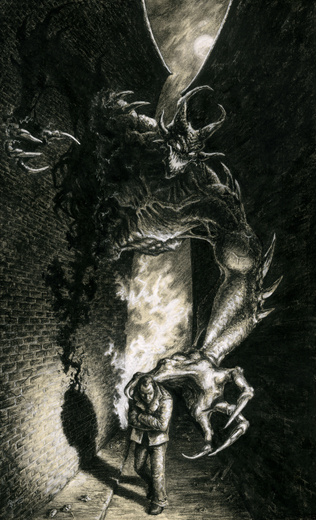 I've spoken before about the divine structure, or "Cycles" of Trinity, but since the word of the day is "Shade" I'm going to delve a little bit into one of the more esoteric and (to me) interesting elements of it.

There are 30 gods, arranged into four tiers of "Cycles"

Priests and holy warriors and common people in Trinity can align to a specific God, or the entire house. Both are common, and you can find examples of each in any medium-sided temple.

It is also possible for a person, or even (but rarely) a priest or holy warrior to align not a specific god or house, but to one of the cycles. This means that somebody could be a follower of the Cycle of Exclusion (the elements), or the Cycle of Transition (the seasons). Monks are often aligned to the Cycle of Partition (Mind/Body/Spirit) and in fact there is an entire country that is built around the Cycle of Discord (War, Trade and Magic).

One of the most subtle cycles, though, is the Cycle of Dichotomy, which is one of the two cycles of two, and consists of Mitras of Light, and Shotan of Darkness. People aligned to this cycle understand that light has no meaning without darkness, just as darkness is made more meaningful by the existence of light. Truth is made more worthy in the face of lies, and lies mean nothing without an preponderance of truth. Perhaps the most striking view: you can't have revelation without secrets. All of these views are\some variation of Shadow.

What's especially interesting is many people would look at the last paragraph, and agree with those statements--and that is what makes the Cycles of Trinity so central. A farmer might, for most of their life, focus on making it to a hopefully successful harvest (Kera of Fall). They might really focus on optimizing the spring planting and growing their flocks and herds (Cime of Spring) They might even focus on the meaning of all the seasons as it relates to them (Cycle of Transition) This doesn't mean that they don't that they don't gossip the secrets they've heard, or that they don't tell white lies that feel are part of a greater truth. And when they do, they are aligning to the Cycle of Dichotomy.

Even a priest, dedicated to the worship of the Green House, might spend hours studying ancient texts to learn secrets. In doing so, he might be aligning to Indre of Magic (Green); he might be aligning to Tarn of Mind (White). But if the goal of his heart in pursuing the knowledge is the desire to reveal hidden ancient truths, he might actually be aligned to the Cycle of Dichotomy--seeking to find light among the darkness.

The gods of Trinity don't actually care if people worship them, they exist because they are needed, and the Cycles of Trinity turn, because people align themselves to the gods and cycles within it. Some of these alignments are obvious, and some are subtle. Sometimes people align to one thing when they believe they are working for another. And sometimes people work hard to align themselves a certain direction they believe in. But sometimes a farmer aligns to the great Cycle of Dichotomy when he rests in the shade of a tree, to escape the glaring light of summer.

The picture at the top of the post is "Shades of Guilt" by one of my favorite artists, Paul Bielaczyc of Studio Aradani. I got to watch the work evolve over 4 years at GenCon, from a notepad sketch he was excited to show me, to its final form, which I bought a print of when it was available. I love it because it's actively creepy in the way it plays with light and darkness, and also with shadow and reality. But I especially like that it's not in black-and-white. It's got a sepia vibe, and that hint of color just makes it worse.