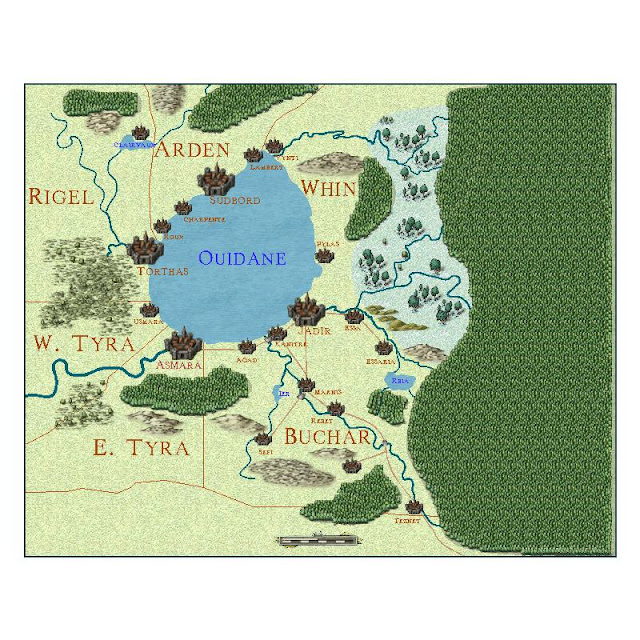 Today's word is "thread" and I choose talk about story threads.
First Campaign
While I've been playing RPG's since the 70's, I really got back into it in September 2000, when 3e came out. My brother in law was living with us at the time, so I created a game for him and a couple of other friends set in my world, Trinity.
That single game ran for over seven years, with ten different people who showed up throughout that time, and a story that went from 2nd level through its conclusion at 16th, with a short adventure after that so everybody could try out their 17th level abilities including 9th level spells.
And because I was the GM throughout that entire time, there was never a need to get to a stopping point. The story evolved organically, even in the final non-stop two years or so, where the characters went to multiple realities and planes, ran across old foes, and dealt with some of the most dangerous people in the world and advanced five full levels, before taking finally culminating the story in a "stealth" assault on the city of the Illithid to rescue the new King.
In all my years of gaming, I'd had never had a game hold together so well. There was a common thread that everybody was invested in, and once everything was done, the players could look back at any piece of it, no matter how weird and disconnected it seemed at the time and understand how it fit.
People talk about a story writing itself. That totally didn't happen, but I did get a vision of where the multi-year story could go, and from there was able to understand how different elements would or wouldn't fit the story. The mid-tier story arcs fit together of course, but as I adapted or improvised situations, those individual scenes managed to be part of a greater whole.

Second Campaign
This is a big contrast to my next dozen or so years. I created a new campaign, and early on had another vision of where it could go. But this time, I split the game with another couple GM's. They'd run their world for months or a year, and then I'd take a turn. This means that my second campaign was the same seven year length, but it was only about half the time.
This time, the story didn't come together in the same way. It wasn't bad, but it wasn't as cohesive as the previous one had been...the I realize in retrospect, that the threads of cohesion just weren't there. Some of the reason for this was the breaks--people would remember their characters, but not what they had been doing with them. Some of it was that the group was more disparate individuals, rather than a cohesive team, so a single story was more muddled.
But one of the biggest factors was that this time I had to have each year-long story arc be a three to five act story. It needed to have a beginning, various arcs in the middle, and then come to a final conclusion. There was nothing wrong with that...the players knew and liked their characters, and the "big story" just wasn't a good fit. Even if I tied in old elements, it would be a "oh, yeah...her. I sort of remember."
When we hit a big ending to the last story, I decided to take the win, end the campaign there, and start new.
Third Campaign
And I began my third campaign in this world, about a year later, I took a completely different stance. One of the big wins in both campaigns was that the players really liked their characters. So I used some ideas from Monte Cook Game's Your Best Game Ever to really build up the party as a real thing, and give the characters something they cared about in the world.
And my story is taking what the players choose to pursue, and putting in the elements that they come across as they go through that story. There are six regular players, who are connected by familial bonds, former or historical relationships, romance and destiny. And they each have personal goals they are pursuing. They choose to help each other, but they also pursue those goals on their own.
I also kicked it off in a completely different area of the region, the country of Buchar (shown in the map above) which is not just a different place, but a different culture and people.
And I didn't just set the game in a location. Rahter, I am working to make the location into its own "character", which the characters and players helping develop it as we play. I got a copy of Monte's Ptolus source book, as well as Green Rohin's Freeport to help me create my first ever urban campaign, but I also let the players bring in whatever people and places they "know" as the story progresses, and make those new elements canon
This approach was our of my comfort zone on many levels, and initially I was worried about it...but two things happened. First, the threads of the story began to bind together as soon as the players realized how the connections and goals would work and started feeling invested in the game. And then, a lake in the region, which had remained unnamed for over 20 years, because I could never figure out something I liked just got a name, because I found one that fit the theme of the area.

So now we're in week 12, and while everybody is doing their own thing...all I see are connected threads making a lovely, personalized pattern.
2020 RPG RPGaDay RPGaDay2020