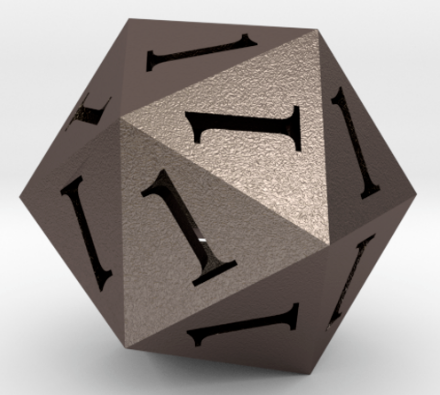 Role Playing Games used to be seen as nerdy people hanging out in the basement. The people who played them could see how they boosted creativity, taught math skills, memorization skills and an interest in fantasy lore, not just Tolkein but the real stories--mythology and history and legend. But others would just roll their eyes if you mentioned Dungeons and Dragons.

But today, things are different. A-list actors are playing RPGs not just for show, but because they really like it. People are much more open to the fact that RPGs are about telling stories, hanging with your friends, overcoming obstacles including epic monsters and ultimately creating something greater than yourself. Unless you have days where you can't roll on the north side of 4.

Today's essay is about bad dice rolls, and in particular what people do when they get fed up with them.

RPGs are about all the things I said above, but they are also games of chance. Just because you want something to happen in the game, doesn't mean it's going to. And the mechanism that most games use are dice. Jumping the ravine to escape the hoards? Sure, it's not that far...you're really likely to make it. Just give me a 10 or better on a d20 with your jump bonus added. What's that? Jump is a useless skill that you never bothered to take and you are wearing plate armor? Give it a try, but don't worry: I'm sure your next character will be just as fun to play.

This is the standard mechanism, and generally players will have some successful rolls, and some missed rolls...and the story will progress. Good GM's don't plot their stories to require good rolls to move things along...but that doesn't mean that good rolls won't help. So a mix of good and bad rolls just gives high and low points to the story, gives it unpredictability and amusing failure stories. Unless, as a player, you have a streak where you can't hit the north side of 4 for the entire session.

At this point, players are pretty universal in their reaction: That die is going away. It's banned from any further use at the table until it redeems itself. It may just be put aside, it may be put in a special hell, or it may be die shamed. But in any case explain all the probabiliy, bell curves and such you want. The die is cursed and it's going away.

This is a fairly simple thing. The die doesn't get to roll for the rest of the session, or until the player feels that it has redeemed itself. Normally, people will put all their dice out on the table. As dice fail to perform, they get moved to the side, put back in their bag, or put in special containment facilities specifically brought along to isolate the bad luck. (yes, really) At GenCon one year, a friend was rolling badly, and he put each of his d20's into separate clear plastic boxes, so they could see the action, but know they weren't allowed to participate.

This is a more recent development in gaming, and tends to be not general bad rolling but where the die has maliciously caused a problem for the player. In this case, people actually write out the crimes of the die, and put the die on the sign, so it is fully aware of the damage it's done. "I rolled a 1, and my owner, the only cleric in the party, died." or "I set my owner's friends on fire, by rolling a 1 when he aimed the fireball." or one of my favorites "I only roll 20's on insignificant encounters." The picture below is one I found on syfy.com and thought was especially funny. 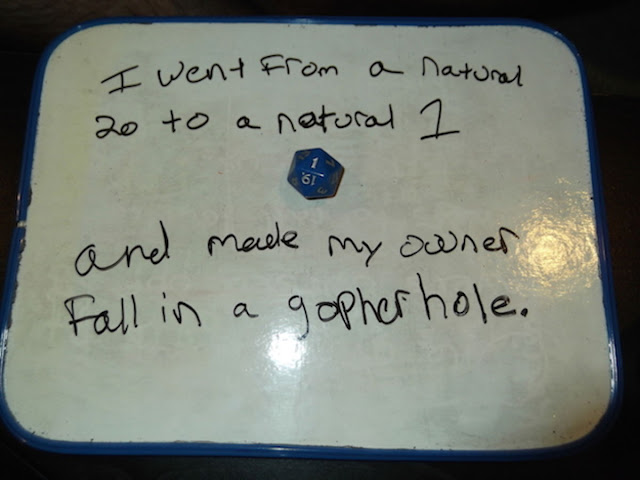 This is a less common but absolutely critical escalation available to the player. If simple isolation or die shaming doesn't work...it's time to show the die that it can actually be replaced. During one event at GenCon, my brother in law didn't make a single hit or save the entire session. When we walked out of the hall, he said through gritted teeth "I need to go buy new dice RIGHT NOW." (Ironically, those replacement dice rolled so well that when we played on Thursdays, I'd make him test-roll at the start of the session. If they rolled a 19 or 20, they were banned by me for the rest of the session.)

Occasionally, Die Banning takes the form of "throwing the die across the room", where they hit they hit the opposite wall, and fall to the ground, there to stay until they are picked up at the end of the night. On occasion, those dice actually break. This is not diestruction; it's just bad luck. True diestruction is when the person crushes, grinds, melts or otherwise destroys the die with malice. Normally the other methods work...long term isolation, replacement...whatever. But sometimes the die has shown itself to be a true traitor to both the player and its kind and extreme measures must be taken. I haven't had any personal experience with this one, but friends have told stories. I found this one, again on Syfy, which illustrated the point well--not just of diestruction, but making it a lesson to the others. 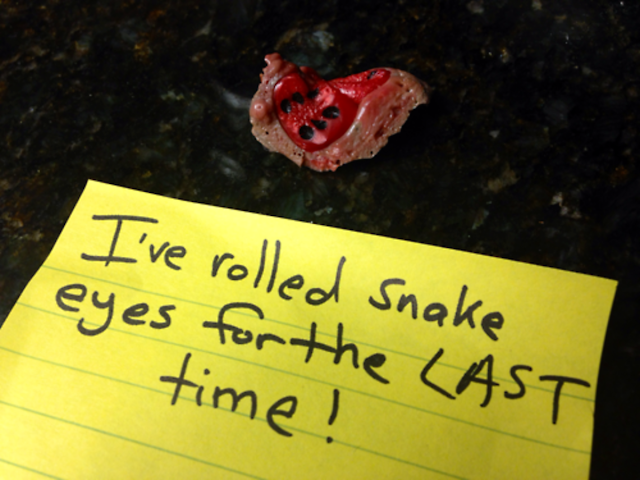 Die rolling is not random. It's a dance of luck between yourself as a player and the physical dice. Die warming, training, and such are all methods used to charm the dice to do what you need. And normally, it's all for naught. The dice will do what they want--good days, bad days or completely forgettable days. But sometimes, they are clearly out of line, and need to be taught a lesson--and I hope this entry has given you some insights in the tools available to you to make that happen.

Today's art at the top of the entry comes from ShapeWays, which is a 3D printing-on-demand company. I was looking for a picture that represented today's essay, and came across this, and clearly had a winner. They seem to do real 3D work for custom parts, fits or purposes. But this product shows a sense of humor and a true understanding of how gamers feel sometimes. This is a render, not a photo, but kudos to them for putting something like this on their webesite.