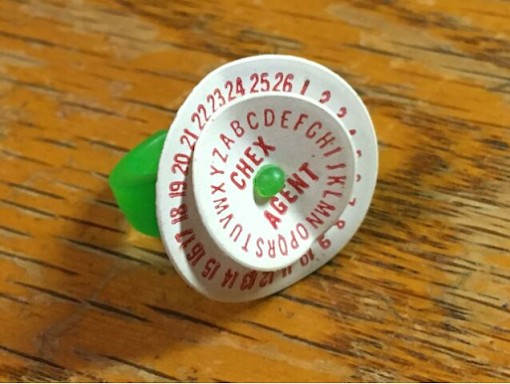 Throughout the history of role playing games, there has been one problem that the greatest designer and player minds were never able to solve: how can a GM and player pass confidential notes between each other, such that it remains confidential?

Just picture, the GM stealthily hands a note to the fighter's player which reads

During the last encounter, that bite infected you and you are becoming a werewolf. You will be bent on spreading your disease to others, and making lycantropes the dominant form of life on earth. Don't tell the others, and don't do anything about it yet...just wait for my signal, then go nuts! :)

It may be metagaming, but the players aren't oblivious. As soon as they see that little piece of paper go from GM to player, they're inevitably going to say "I think Gronar was infected in that last encounter. Let's get him to a cleric, quickly, before he transforms, spreads his disease, and makes lycantropes the dominant form of life on earth."

At the same time, there's honestly no point in the Rogue handing a note to the GM. There's treasure that's been stolen, a person about to be stabbed, a plan to cause mischief, or to otherwise perform and action the rest of the party wouldn't approve of. The minute that flash of white is spotted in the hand of the Rogue everybody is going to be on their guard for the next few hours for any misbehaving.

So what have people tried, to overcome this most difficult of problems?

The first and most obvious solution is to just put the note inside something else, such that its existence isn't obvious. Put the note inside a book, and craftily get the GM or player to take the book, find the note inside and act on it accordingly. There are variations such as the "Shared Players Handbook" or "Can I see that for a minute?" or even the "palm across" options. This is a great in principle, but in practice, it doesn't work terribly well.

First of all, let's go with the easy case--the GM handing the note to the player. This is easier, because the GM can do whatever he wants behind the screen, such as writing and placing the note. He can hand the book to the player..and that's where it goes bad. If there's not a good reason for the player to be taking the book, you might as well just hand them the note, because it's super obvious that shenanigans are going on. Second of all, if the GM is super stealthy about handing off the book, the player themselves may not know that a secret has arrived. At this point, the GM has to do the "you have a secret in that book" head shake, which is usually as obvious to everybody else as it is to the player.

Things get worse when the player is sending a note to the GM. She writes her secret note, hoping nobody saw her writing the note. Then she stealthily places the note into the book, again hoping that nobody saw the note go by.  Then she has to hand the book to the GM--the "thanks for letting me see the DMG *wink wink*" technique. At this point, there is roughly a 97% chance that the player's character will find themselves hog-tied to a post, having their face touched with silver while others search her pack for whatever she stole.

And in that 3% where the technique works, there's the need to respond to the note. The odds are better from GM to player, so call it 50/50 success chance. Now there's a 1.5% chance that the exchange will go unnoticed...for each attempted "stealth" action.

This is actually a variation of the Hidden Note Technique, but can only be executed when the player and GM are taking a break, away from the table and the eyes of other players. This is a MUCH better technique, because someone can write the note out and during a break openly or secretly hand the note to the other party. The other party can read the note and give a brief response that completes the transaction. Call it an 80% chance of successfully completing a bi-directional conversation...which is as close as you're going to get to perfection.

So what's wrong with it? Well, there's the problem of stealthily executing "We need to take a break...everybody leave the room except for this player and the GM." You *might* pull it off with snacks or pizza, but that can get expensive, and there's always the chance that the recipient is going to want the snacks or pizza more than they want to hang back and get your confidential note.

But even if you happen to be super generous with the means to fund such endeavors, even the hungriest of college students is going to get suspicious when the third pizza of the night shows up--and just after the treasure from the last encounter was evenly divided up.

This is a "hide in plain site" technique, and is executed by everybody having note paper, and continuously sending floods of notes between the GM and all the players. The idea is that you might write an effective novel to the GM which says "This is not a real note. I'm just writing it to screw with Julie, because I know she's been keeping an eye on me ever since we found that golden key she insisted on keeping. Ha...when I strike, it won't be for the key." or it could be a note that says "Now...I'm executing my mischief now!"

Assuming everybody plays along, there are three major problems with this technique:

Solution 4: An Actual Solution
Virtual Table Tops, such as Roll20, have provided an electronic equivalent of a gaming table. My group have always used it in hybrid mode...playing at the table, with laptops and having people from outside the area dial in. With Covid, we've naturally gone 100% remote.
Virtual table tops have in-game in-character messaging, So if the Rogue wants to place the tracking device in Bernices backpack, the player can just send the gm "/w GM I want to place the tracking device in Bernice's Backpack. [[d20+8]] to attempt it." And the GM can read and respond to this.
This is an almost untraceable note, and the GM can respond in kind. The two of you can even go back and forth a bit filling in details as you go.
There are only two real risks here. First, there is the "Hey, the Rogue is typing a lot...he's probably trying to steal the key again." problem, where people notice your behavior. The second is that instead of typing "/w GM..." you type "/broadcast_to_everybody_else_online_because_I'm_an_idiot I want to secretly place the tracking device in Bernice's bag next to the key she thinks I want."
But even here, all is not lost. If you happen to send your message to everybody instead of just the GM, there are still recovery options. The most direct, and successful? Delete your character, sign off from the game, leave the Discord server and never speak to anybody at the table again.
2020 RPG RPGaDay RPGaDay2020