- August 01, 2020
RPGaDay2020 - Day 1 "Beginning"
Introduction
Today is the first day of August, which begins the #RPGaDay2020 essay series. Sometimes I get through all 30 essays, sometimes I don't, and sometimes I write essays from previous years that never got written. But today is the first day of the new series, and as with last year Autocratic and the #RPGaDay crew have come up with prompt words rather than prompt questions.
The goal, as always, is to share positive and fun stories about experiences with Role Playing Games. And it's especially important this year, since of course GenCon was cancelled, and is a virtual event, instead of an in-person 5-day orgy of late nights, early mornings, board games, role playing games, demos, fast food, sore feet and over-stimulation from the sales room.
For those who enjoy the essays, I am glad you do. I write them for myself, and enjoy writing them, but always like knowing that something I wrote amused, reminded or resonated with someone.
For those following along, or those wishing to participate, here's the list for the year.
And as always, if you want to contribute, but not write your own essays, feel free to leave your own stories or thoughts in the questions. 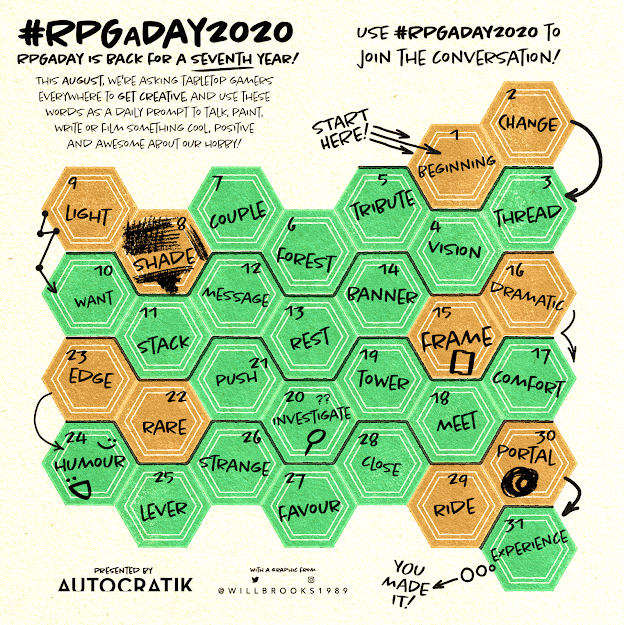 My First Time At The Table
In the summer of 1979, my mother asked if I wanted to try something new that she had heard about. It was in the basement of the main branch of the local library. I went in, and was assigned to one of two tables, with four other people, one of whom seemed to be in charge.
He explained about this new game called Dungeons and Dragons, and he had a large map laid out on the table, with a few metal figures and a bizarre collection of dice. (Seriously, even the six sided dice were a weird color.)
He put us our figurines at the beginning of the map, and told us that our goal was to work our way through the dungeon.
Given my experiences since then, it was probably one of the worst demos ever.
Despite all that, I was absolutely hooked by the concept--it was the game I had been waiting for all my tweenage life and I just didn't know it.
I got the starter set at Joe's Hobby Shop as soon as I found out they sold it, and 41 years later, still have a weekly game. And while virtually every single thing about my understanding, playing style, world building and so on have changed...I still have my magic users hide in the back--but only because I'm too pretty to take damage.
2020 Introductions RPG RPGaDay RPGaDay2020