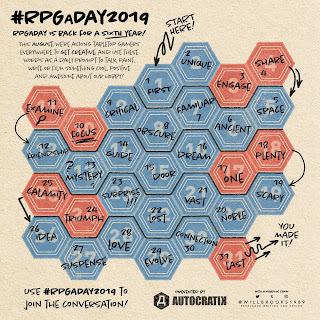 You know that feeling when an important date is coming up, and suddenly you look at your calendar and realize that the date has shot by? That's me with this year's #RPGaDay essay exercise. Between GenCon, and the workload that hits after I get back from it, it was August 9th before I realized it was even August and not only had I not written anything but I hadn't even figured out a hosting platform for my essays.

With the death of GPlus, I needed a new platform that was 1)Open 2)Linkable 3)Gave me the tools to organize my content. As I was walking downstairs this morning, I realized that I had been wanting to start an RPG-related gaming blog and that blogger would be the perfect platform for my humble needs. So a few clicks later, and here I am, ready to share my thoughts on a variety of writing prompts and self-directed essays.

My "First" is from August 1978, when my mother suggested there was an event at the library that I might enjoy.

I went into the basement of the library, which I didn't even know existed, and found a room with a guy in his 20s and several kids my own age. He explained this new kind of game called Dungeons and Dragons, which was a "Role Playing Game."

The adventure consisted of putting metal figures onto a large map, with symbols for doors and traps, and figurines for monsters. There wasn't much in the way of plot, we didn't make it even halfway through the dungeon before we ran out of time, I had exactly one magic missile spell, and once I used it, I had to resort to a dagger that basically did the same damage as my spell. So one could say it wasn't a great experience--but I wouldn't say that. I was HOOKED.

My damage die was in the shape of a strange pyramid. I rolled a spherical die to see if I hit things or successfully noticed the trap or lever we were looking for. There was a map that changed as we figured things out, and the GM drew new things or placed new items on the board. Plus, I got to be a wizard!

I remember taking paper route money and going to a local hobby store (Joe's Hobby, on Wyoming) and buying the boxed set. It came with an assortment of colorful, multi-sided dice, and a rulebook which as I recall only took the characters to third level.

My first game was with my brother. I drew maps on a chalkboard we had, and there was no plot.

We had the best time, and spent hours at it, even though his characters stopped advancing after about the third time we played.

My game style changed dramatically when I started to wonder why there was an orc sitting alone in a room with a big chest full of gold. And around the same time, we went to Jocundry's Bookstore in East Lansing and I spent $25 for the Advanced Dungeons & Dragons Dungeon Master's Guide, and my brain exploded, but that's an essay for another day.