RPGaDay 2015 - What is your Favorite RPG Accessory 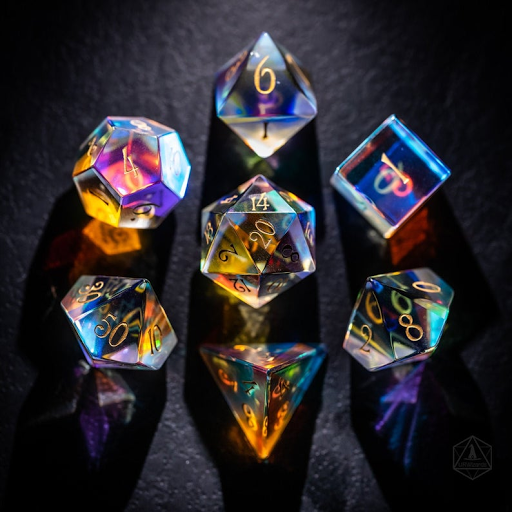 Retro-post: This was originally posted on GPlus in 2015

It's a one word answer, but honestly if you are a gamer, I don't know what other answer there can be.First, they are beautiful. They have evolved so much over the years: colors and shapes and sizes and etchings. Buying a set of steampunk dice by +Q-workshop  in the manilla color is on my bucket list. Plus the always-amazing dice by Crystal Caste and Chessex, of which I have way too many just because I love the new designs.But there is also the stories that go with them. I don't care how much of a "role" player you are. Roll max damage on a critical hit to one-shot the end boss and you're crowing about it for years afterwards. By the same token, if you botch enough in a given convention event or game night, you bitch about not just that, but the fact that you always roll badly at cons. The story you were playing is irrelevant...it's the exceptionally good or bad rolling that takes the headline. (My favorite luck moment? I rolled something like 12 successes on 10 dice in a White Wolf game)And that leads me to mythology. Take a world-renowned skeptic, preferably somebody with a doctorate in statistics, and touch their gaming dice. You know they will freak the hell out.Pre-rolling, die shaming, lucky dice, die training, isolation, right vs left, english...all the same thing. This is not superstition or belief...this is knowledge that your dice are affected by forces outside of the act of rolling.And finally...a newish trend: Customization. You can create dice that have exactly what you want on them. For $1/die...basically the cost of the die itself, you can have one of the sides custom etched.With all those things going for them...I don't see how anybody could say anything else.Side note: If you have a significant other who ever utters the phrase "Don't you already have enough dice?" you have seriously mis-judged this person and need to be moving on. Is it worth ending the 30 year marriage to the person with whom you have raised 4 children? Duh...don't use your children as a shield for your poor choices.